"Marvel Zombies 2" Everything "Snakes On A Plane" Should Have Been 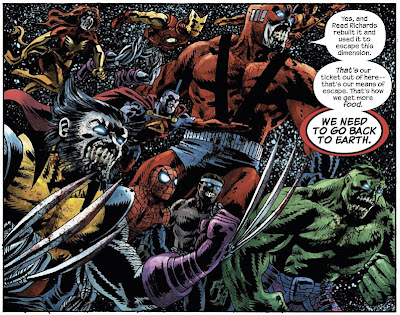 Any way you slice it -- no matter what socio-cultural symbolic spin you happen to give -- the "Marvel Zombies" franchise is the "Snakes on a Plane" of the comic book world. You cannot get more implausibly high-concept than "what if all the Marvel superheroes turned into flesh-eating zombies?"

And that's why the idea is so brilliant. I mean, it's kind of stupid. But it's brilliant.

There is something I find incredibly compelling about the Marvel Zombie books, an essential quality I cannot force myself to turn away from. I buy all these damn books. I buy them though they are rather silly at points and feature covers that usually have nothing to do with the issue. I read them. And then I freakin' re-read them.

Well, for starters, while the concept is utterly ludicrous, Robert Kirkman is not hacking it out and the Sean Phillips art is quality. Which is to say, it is not executed bad. The books merely stem from a single bad premise, happy in its admitted baddity.

And maybe -- as in the case of Death of the New Gods -- there is a certain sick thrill in watching the end of things. In both Marvel Zombies 2 and Death of the New Gods we are given a front-row seat to the guaranteed destruction of a universe, a systematic dismantling of familiar concepts. It's the equivalent of watching that castle burn in California yesterday on CNN -- it's horrid. And it's horridly captivating.

Marvel Zombies 2 opens with the Marvel Zom Squad, plus a few cosmic hangers-on, hovering over an asteroid in space. What is Dark Phoenix doing there? F**k if I know. But she's frickin' there, with her guts hanging out. And so is Thanos. Life as we know it is doomed.

Then we travel back to Black Panther's fledgling community in New Wakanda. His grandson finds Hawkeye's head under some rubble. What is that head doing there? F**k if I know. Is bringing it home to show grandpa the smartest thing evah to do? Probably not.

Next we visit the Zom Squad again. They are apparently eating Ego the Living Planet. Does the extended scenes of the zoms devouring gore help forward the plot at all? Not really. But they're very cool.

Hmm, here is a subplot involving human rebels, some sort of revolution political-thing. Does it specifically involve ZOMBIES? No? Flip, flip.

Now zombie Hawkeye's head is on the body of a female robot.

As Zom Wasp asks, "What else could possibly happen?"

The issue ends as it begins, with a shot of the Zom Squad -- sans Zom Thanos, who was eaten and spit out -- in space. Spider-man, who, even though he ate his wife and aunt some time back, hasn't managed to lose his sense of humor, asks, "Are we there yet?"

Marvel Zombies 2 is the sort of book that in the 90s would have been done unintentionally bad, with awful art and a hysterically maudlin emo vibe. But in this post-modernist era Marvel is in full control, and more than aware of what it is doing. So are Kirkman and Phillips. And so am I, purchasing it.

I'm not dumb. I'm smart because I am buying something dumb recognizing it is dumb and enjoying it for its specific dumbness. By revelling in Captain America getting the top of his head chopped off with his own shield or Hank Pym eating a sedated Black Panther's leg as a mid-morning snack, I am a genius.
Posted by Verge at 3:30 PM