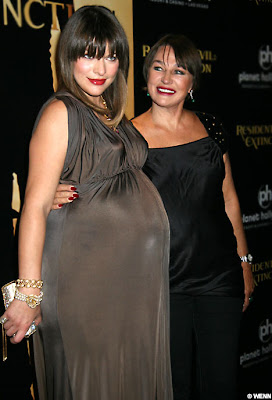 UK's The Daily Mail has just run a photo of a very pregnant Milla Jovovich at the premiere of "Resident Evil Extinction" with the catty line:

"Enormous Milla shows what NOT to wear when you are pregnant"

Come now, this woman is just about to drop a baby any second. She's SUPPOSED to be huge.

And it's not like she's wearing a thong bikini.

Which brought to mind this video from Dove's Real Beauty campaign:

Do the idealized "weights" of superheroines in comics influence women as well as those of models in fashion magazines.

I said, "I don't think women take them seriously."

My BF pointed to interviews with female celebrities where they say they can't portray a certain superheroine because their "boobs aren't big enough."

Anyway, food for thought...which, as you know, could be fattening.
Posted by Verge at 7:55 AM