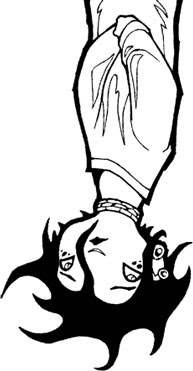 Thanks in part to OS reader and friend Chris, I've managed to get my hands on five Minx titles to review: Re-Gifters, Confessions of a Blabbermouth, Clubbing, Plain Janes, and As Good As Lily.

It should be fair to note that I have also been reading large piles of teen manga from my local library, which has informed my opinion on these Minx books somewhat. For the most part, I found the manga I read to be fast-moving, emotionally punctuated, and engaging for the targeted audience.

Also, I have debated whether or not I should push through reading books or comics that I find boring/bad in order to give a proper review. I have decided to stop reading any text that I find so disengaging that I want to quit it; such a reaction would match that of the potential consumer, and says a lot.

So, in order of how much I enjoyed them, here are my brief reviews for the Minx line. 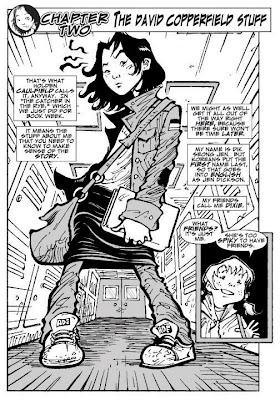 And I know there has been a lot of criticism regarding the Minx books and the fact that most of the creative talent involved don't have vaginas. But I think Mike Carey nails this. And the art is dynamic, open, and endearing. Of all the Minx books I've read, this one is closest to possessing manga energy.

Thoughts:
Plain Janes is very much Minx's "signature" book, and the one with the biggest commercial potential. I enjoyed it but felt it skewed a little older than the target audience. It felt a lot more like a graphic novel from Top Shelf or Fantagraphics than a teen book. But the pace moves very well, and the art is excellent.

Like some reviewers noted, there are a few characters in the novel that get a little cliche. The "evil sheriff." The gay boy with the big gimlet eyes and barrels of school spirit. The Sporty Spice girl. But the protagonist, "Main Jane," had some nice layers to her personality. 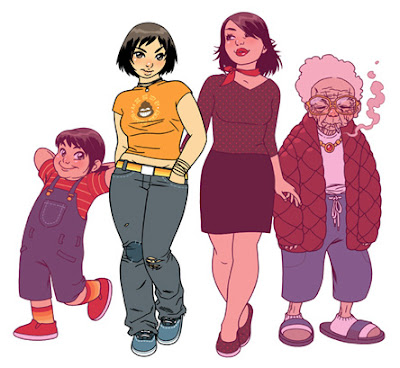 Thoughts:
This book was great but needed editing. There is just too much text, too many big word balloons, and too many panels on each page. Had some of this been cut out, allowing the story and art to "breathe," it could have very well have been a far more successful book.

How about some African-American girls? They go to my local library and take out manga all the time. 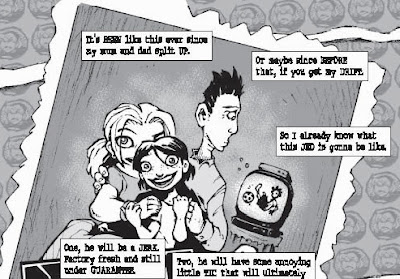 Thoughts:
I liked the frenetic, fast-paced quality of the art but the book suffered from being one of the last I read. The short, big-headed, huge-eyed spunky protagonist with the bobbed hair. Where have I read this before? Just about in every Minx book I read.

I made it through nearly half the book before I put it down. To be fair, I read "Re-Gifters" after this and loved it. But I just had Minx burnout with "Blabbermouth." 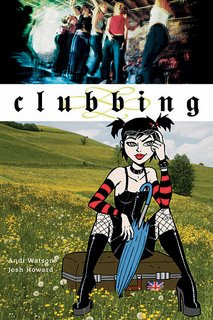 Thoughts:
The first several pages of "Clubbing," with its open, engaging art, seemed promising. But I quit at page 29. I just couldn't care less about this girl. And where were the clubs? The book is called "Clubbing." I don't want a Merchant Ivory movie. I'm a prole, I know. But I'm just recording my thought process as I read it.

An update: the BF said that the title is a pun because it really refers to golf. Oh, now I really want to read this.

And there you go, my thoughts on the first five Minx books. Some were enjoyable. Some were not.

Also, as I said before, the protagonists were all a little bit similar. Petite black-haired beauties with large expressive eyes, a punky attitude, and bobbed hair. I have no idea where such an archetype came from.