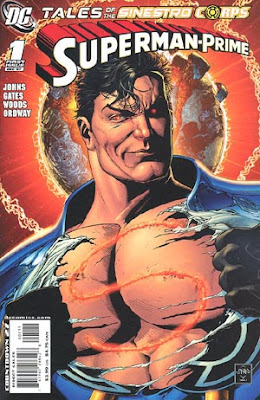 "Oh, I get it," I said to Self as Self was reading "Superman Prime" #1, "Superman Prime is just a big Fanboy run amok...or at least Geoff Johns's interpretation of one."

The key to this, as far as I am concerned, is Superman Prime's rant about how his "heroes let him down..."

"They don't care about anyone but themselves...it was terrible. Hal Jordan went bad! Wonder Woman killed someone! I couldn't watch what they did to Sue Dibny." (emphasis mine)

The Dibny line is very telling. Is S.P. really referring to Dr. Light or Jean Loring? Or simply parroting complaints about the "Identity Crisis" and the whole "darker" tone DC had seemed to take since that miniseries?

Getting that out of the way, the book itself features a very entertaining extended fight sequence between S.P. and ALL the DCU, and flashback sequences with tortured continuity explanations that makes my brain hurt.

The art by Pete Woods is a stand-out and a revelation; perhaps the key is the fact he has inked himself here. Jerry Ordway's art is also top-notch.