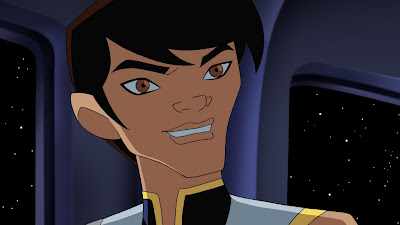 Holy crap, I just watched the latest "Legion of the Superheroes" cartoon.

Okay, so in this Legion universe, Karate Kid is Asian. An Asian martial artist. That's clever. If you're going to have an Asian kid in the Legion, he might as well wear a white karate outfit and be into martial arts.

But it gets better. Karate Kid wants to join the Legion. But he has no superpowers. So they take him into the group on a trial basis. He must prove himself to them and, basically, earn his keep.

So what job do the Legion give him?

They give him a cart with wheels and he has to go to every Legion bunk and pick up their laundry. He is also a great housekeeper.

In return, the Legion makes it clear that he has yet to prove himself to them, and is not really as legit member.

Karate Kid doesn't really hang out with the rest of the group, because they really don't accept him. He is paired off with Chameleon Boy -- ostensibly another "minority" member who also is on thin ice with the Legion.

But as Superman keeps reminding them, Karate Kid may not have fancy-schmancy powers like the rest of them...but he has a strong work ethic! Steaming and pressing Element Lad's sheets and polishing the mess hall, Karate Kid is a role model of what you can accomplish "when you don't have a lot but are willing to work hard."

Through it all, in a fake Asian accent, Karate Kid spouts out pseudo-meaningful nuggets of wisdom about "finding your own destiny" and working despite the odds.

This episode was the most mind-bogglingly patronizing thing I've ever seen since viewing the silent movie "Shadows". In that movie, Lon Chaney takes the role of the wise, stomach-churningly humble, hardworking Asian laundryman. The fact that around 80 years have passed since that film & this cartoon but the Asian protagonist has been portrayed so very similar is troubling.
Posted by Verge at 12:34 PM

Email ThisBlogThis!Share to TwitterShare to FacebookShare to Pinterest
Labels: Legion Of The Superheroes