"The Dark Faith spreads throughout the DCU as the Daughters of Lilith take the forefront in a recruitment drive to convert people to the Religion of Crime through the Lesson of Lust."

and look at this cover: 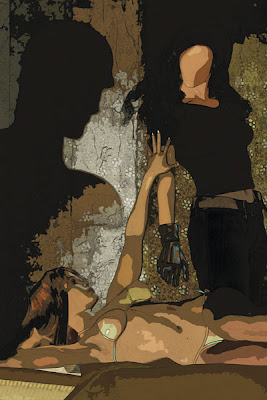 This is extremely steamy stuff.

Which is absolutely fine, unless this ends up reading like a pulp fiction throwback "lipstick lesbian" adventure with more to titilate the boys in the audience than anything else. I have faith in Greg Rucka that this probably will not be the case. But...

I think it's the combo of the cover -- which is tastefully done but with a heavy sexual vibe -- and the unfortunate blurb which sounds overtly sexual & sleazy.

See, combine the image with the words: 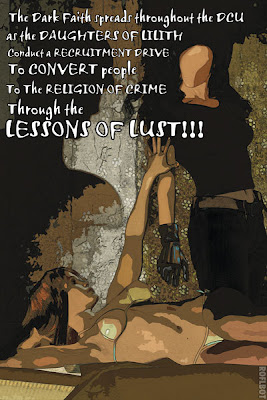 Symbolically, who are the "Daughters of Lilith?"

Lilith is a demonic figure from Babylonian times who was considered evil because she couldn't bear children, couldn't "copulate normally," and brought disease, infertility, and unhappiness wherever she went. (there is debate whether she was originally considered a positive goddess-figure before the "patriarchy" got their hands on her, but that's a debate for another day).

In folk-tradition she is the first wife of Adam who had the audacity to claim they were equal; when he balks, she dumps him and goes away to live on her own. Which of course makes her an evil baby-killing demon, which is largely how she was perceived.

In modern times, feminists have attempted to "take back" Lilith by naming magazines & music fairs after her.

Lilith, with her shunning of Adam, her unwillingness to accept her dictated societal role as babymaker and passive helpmeet, and her association with radical feminism, has been associated with, among other things, lesbianism.

Now, does the "Dark Faith" & "Religion of Crime" of the "Daughters Of Lilith" put them symbolically at odds with organized religion? Why would they be at odds?

What is the symbolism of "recruitment drive" and "convert people" in relation to stereotypes and slander against homosexuals?

So the "Daughters of Lilith" are of the "Religion of Crime" and are actively trying to "convert people" and get "recruits" to their "Dark Faith" through the "Lessons of Lust."

Again, this is not to say that this is what "Crime Bible" is all about. But as I said, this ad copy does a disservice to the book. And associating the figure of Lilith with evil has a little bit of societal baggage attached to it.

Email ThisBlogThis!Share to TwitterShare to FacebookShare to Pinterest
Labels: Batwoman, Crime Bible, homosexuality in comics, the question, women in comics