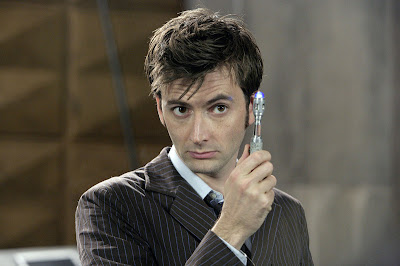 The BBC has confirmed a "gap year" for the popular sci-fi series "Doctor Who," meaning there will be no new shows for 2009.

Instead, there will be three "Who" specials run during the gap year.

Also, Catherine Tate, who guest-starred during the 2006 Christmas special, is set to reprise her role as Donna for the complete 2008 season.

Where the return of Donna leaves Doctor Who's assistant Martha is a big question mark, though actress Freema Agyeman is also signed on for 2008.

In other news, actor David Tennant is a bit of a cutie-pie, but of course that's totally not why I watch "Doctor Who."
Posted by Verge at 11:38 AM

Email ThisBlogThis!Share to TwitterShare to FacebookShare to Pinterest
Labels: Doctor Who