Amazons Attack: The Fans Talk Back To Pfeifer 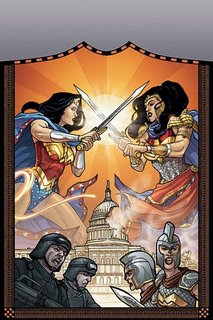 Will Pfeifer on his blog innocently enough requested feedback on "Amazons Attack" -- and boy he got it:

"Congratulations! You have managed to do what no Nazi, God or Super-Villain could do!!
You killed Wonder Woman."

"Amazons Attack" is the most damaging, worst Wonder Woman story ever.
I wouldn't mind so much if it was just a bad story, we are used to that, but I don't think you are even aware about how much damage you did to the character."

"So it was all very disappointing.
For the disregard of the rich history and stories of the WW characters.
And for how empty the whole story turned out."

"Your other comic book work has been excellent, but I'm baffled by the decisions you made with this story. Can you explain how this ending came about?"

"So, mister Pfiefer, the editorial guys gave you this to write but do you REALLY like WW and her family? For 6 issues, WW didn't do ONE single heroic thing! Who was the hero then: Batman?"

"That said, I really do think you owe Gail Simone an apology for writing this story. I can understand that you'd be inclined to take pride in your work, and be defensive when it is attacked. But I hope that, rather than be soured on the experience of getting feedback from your fans, you instead take those fans seriously when they say this was something truly dreadful, beneath your talent."

"She's no longer an ambassador from a wise people; she no longer has anything to teach, because her society is vastly more loathsome than the one she's visiting. She's just another superstrong chick in a bikini."

"Honestly, this series was a toxic piece of crap and not what I would have expected to see your name associated with."

"But with specific regard to the ending.....oh man. That was the most mind bogglingly awful ending I have ever had the misfortune to witness in ANY series, ever, in the entire time I've been reading comics."

"Overall I thought it was a pretty woeful series."

"I am done with this company and this new, unpleasant and laughably ineffectual "hero" running around calling herself "Wonder Woman". I haven't seen Wonder Woman in the DCU since the close of Volume 2's 226th issue. And it looks like she is forever lost, which is a real shame."

But one commenter might have pointed his finger at the real culprit:

"Word on the Internet is that you were basically handed this story pre-plotted by DC editorial, and that you basically scripted the plot points. I don't know how true that is, but since I am a huge fan of your H-E-R-O, CATWOMAN and AQUAMAN, I'm hoping it is indeed true. You couldn’t have possibly conceived AMAZONS ATTACK."

I haven't read "AA," and I probably wouldn't unless I got the books for free.

But I DO know that Will Pfeifer has established himself as a great writer in the past.

And it takes a lot of stones to put yourself out on your own blog and face this sort of criticism, rather than hide out in an ivory tower and pretend nothing is wrong.

Time for damage control.
Posted by Verge at 6:35 AM