If you haven't heard, there's a bit of a fracas going on in Guilford, CT concerning a teacher who gave a 14-year-old student a copy of Dan Clowes's "Eightball" to read.

The teacher has resigned, but the student's parents, who said that their daughter is now the target of other pupils angry that the teacher was forced to leave, think it's not enough of a punishment for him. 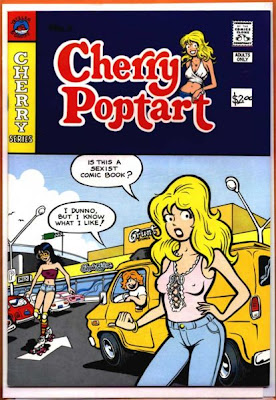 Now, I read both "Wendy" & "Cherry" at the local comic shop where I worked when I was 16. Should I have had access to them? Was the shopkeeper responsible for keeping them out of the hands of me and my underage co-workers?

But what about comics like Gilbert Hernandez's "Birdland," which features crossover characters from "Love and Rockets" but has explicit sexual content? Or Kate Worley and Reed Waller's "Omaha The Cat Dancer?" 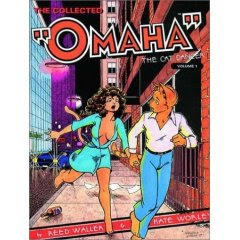 For that matter, I read Judy Blume books written for teenagers with sexual content when I was 12! 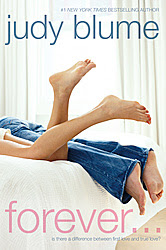 The difference, I suppose, is in weighing the artistic merit of each work against its adult content. But who will do that? And will the citizens of Guilford have the same yardstick for assessing what is "art" as does New York City or Seattle? And does the medium of the graphic novel itself -- which has been so inextricably bound up in memories of their "funny book" roots -- confuse the issue even more?

Charles Brownstein of the Comic Book Legal Defense Fund commented on this point to the local press:

And while we are on the topic of mostly "indie" comics, what of more adult content in mainstream superhero titles? 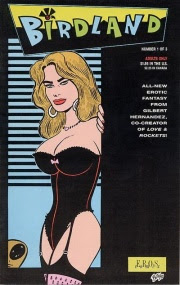 so much more different than this:

That's why we have debate, opinions, and laws, folks. It's not black-and-white.

Well, "Cherry Poptart" is rather black-and-white. She has a best friend named "Patty Melt" and a boyfriend called Johnny F**kfaster. But you know what I'm sayin'.
Posted by Verge at 9:19 AM