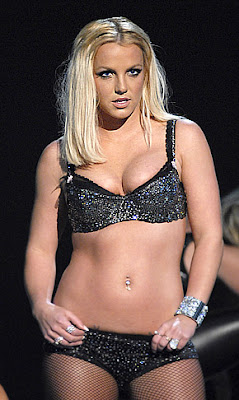 her difficulties dancing & lip-synching at the Video Music Awards notwithstanding, is Britney Spears really fat?

Major newspapers and gossip columns have referred to her as "as big as a house," "lard," fat, etc.

But is this the face of "fat?"

Or is this an average woman's body clothed in a Las Vegas dance outfit and nobody will forgive her for breaking the illusion?

Well, I'm a little disturbed by the sheer volume of venom this obviously troubled woman has received.

But apparently not as much as this fellow: