Celebrating The Life Of Mike Wieringo in NYC 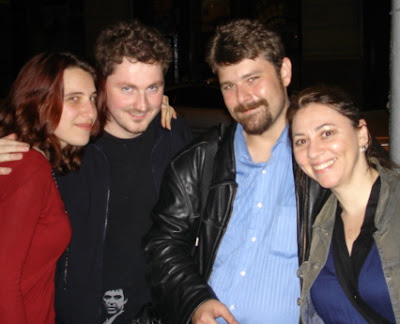 "What do I wear to an Irish wake," I ask Senor G. as we get ready to attend the wake for Mike Wieringo. "Something black?"

"Do you know anything about an Irish wake?" he asks me.

According to Wikipedia, an Irish wake "...celebrated the life of the deceased and shared food and drink throughout the wake. Music, dancing, and physical games made the wake feel more like a party...Though it is a time of sadness, the presence of friends and family makes it more bearable and there is generally great joviality as the deceased is fondly remembered."

This sentiment was later echoed by Todd Dezago, Wieringo's collaborator on "Tellos" and a close personal friend of his. He told the hushed crowd at Flatiron Joe's, where the wake was held, that Mike would have wanted us to enjoy ourselves and have a good time.

Flatiron Joe's donated the space and made a cash contribution to be split between The Hero Initiative, who put the event together, and the ASPCA. Both were favorite charities of Wieringo's.

If there was anybody who could bring together so many comics professionals into one place, it was Mike Wieringo. There was a heavy Marvel presence at the event, with Joe Quesada and Publisher Dan Buckley on hand as well as C.B. Cebulski, Tom DeFalco, James McCann, Jen Gruenwald, and many others. Walt Simonson, Jimmy Palmiotti, Amanda Conner, Tom Raney, and Nick Barrucci attended as well.

The Beat's Heidi MacDonald was also at the event, as well as Patty Jeres, the Comic Book Legal Defense Fund's Charles Brownstein, and writer Ben McCool who has an upcoming issue of "Justice League Unlimited" coming out. 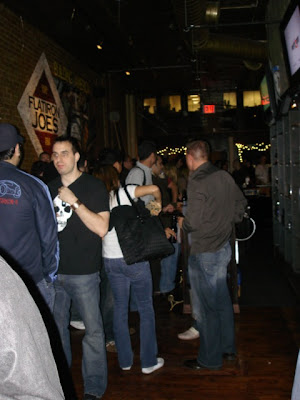 One of the artists donating his time & pen to the wake's charity auction was Dennis Calero, who I've known since my days at Valiant/Acclaim. He told me of a really interesting new project that's coming up for him that's hush-hush at the moment -- though when he gets the "all clear" to talk about it, we'll definitely have an interview.

At some point during the wake, as the crowd began to swell, me and Senor G. found ourselves swept by the tide towards the front of the bar. And right at that moment, in the middle of this human carwash of humanity, Dan Didio stepped through the door.

I was standing maybe two feet away from Didio.

My boyfriend at that moment grabbed me in a big hug and sort of swept my head away from Dan so he wouldn't see me and we wouldn't literally bump right into each other.

After the near-miss (one of several that night), my BF had to step out and have a smoke to compose himself.

Now, I would be remiss if I didn't mention the charity sketch auction, and the wonderful pieces donated by the artists on hand.

There were great iconic head-shots of Thor, Loki, Cyclops, and tiger-warrior Koj from Dezago & Wieringo's "Tellos" by Walt Simonson, a Hulk by Tom Raney, a zombie Captain America by Dennis Calero, a Jonah Hex by Jimmy Palmiotti, and a still-life with flowers by Joe Quesada's young daughter.

I put $20 down for the Calero piece but was quickly outbid. Obviously I learned nothing from my eBay days about playing it cool & bidding at the last minute.

I also had a chance to briefly chat with Mr. Quesada, who was also instrumental in putting this event together. He was very gracious and even introduced me to Dan Buckley. It was a highlight for me.

All-in-all I had a great time, and felt that the Irish wake really lived up to its definition and celebrated the life of a great artist whose life ended far too soon.

You can read some great Mike Wieringo tribute stuff at this Newsarama link...

And you could always donate to Ringo's two favorite charities, 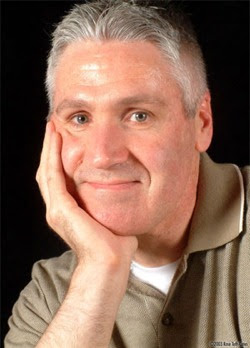