A Tale Of Two Lesbian Superheroines 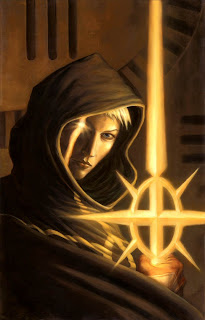 1. Batwoman: I gots nothing other than: stabbed, bound to a table, smoochies with new Question. Where is she now? Where is her series?

2. Quasar (Phylla-Vell): Has a four-issue limited series coming out.

Phylla who? Quasar gay what?

As I said in an earlier post, the the differences are:

* Quasar is not a top tier character -- she is second/third tier, like other gay characters such as Pied Piper, Hulkling, Holly Robinson, Moondragon, etc. So there is a feeling of more freedom to be bold, to be creative, to be more diverse. Batwoman, as "Wikipedia" describes her, is "the female counterpart to DC Comics' popular superhero Batman."

* Quasar is not "marketed" as a gay character. That is to say, there is not a publicity campaign focusing specifically on her sexuality. Like Hulkling & Wiccan from "Young Avengers," the sexual preference of the character is just one facet of a multi-layered character. In contrast, Batwoman was specifically "pushed" in the media as a lesbian character first, superheroine second.

But I think since DC initially traded off of the publicity surrounding Batwoman's sexuality, I would hope that they have a series starring her in the works soon and are ready to promote it. Yes, there may be fears that having a character so "close" to the Batman brand (if only by name and design) be gay might spark controversy -- might set off the "Boycott Tinky Winky" contingent.

On the other hand, America loves "Ellen." If the networks were chicken-shits they never would have found this out and made lots of money.

So grow a pair and give "Batwoman" the spotlight again. And give her good stories. If I want to read slash fan-fiction with a liberal dose of girl-on-girl bondage scenes I can get that for free online.
Posted by Verge at 5:00 PM