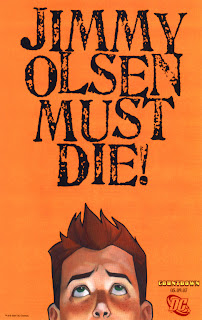 The problem with "Countdown" as I see it (we will set aside the shit-eating dead-baby demon for a moment) is that it's not enough story for the price.

It's like a bunch of "clips" updating you as to the continuing adventures of assorted characters with no real "story" structure per issue. Oh look, there's Holly Robinson getting off the bus. Jimmy's had a bad dream. Pied Piper & Trickster shoot the shit. These are "clips." Not a story.

Oh, I'm sure as a trade paperback it will blend together nicely. And I found the clips more or less entertaining. But it's a too-quick read with no resolution and not a lot of suspense. It's the comic book equivalent of the "Sopranos" finale.

Wasn't there a weekly DC book some years back, maybe late 80s/early 90s, that had a cheaper price than than the regular books? Was it "Showcase?" What was it?

At any rate, $2.99 is too much money for me to drop on a book like this on a weekly basis. But I think if it had a lower price point, I'd be more likely to pick it up.

As a side note, I find it really ironic that Jimmy Olsen might be the "key" to "Countdown" (and perhaps the entire DC Universe) when in the first "DC Revamp" discussions several years ago he was specifically pointed out as being emblematic of everything that was wrong with the company's image. Full circle, I guess.
Posted by Verge at 12:49 PM

Email ThisBlogThis!Share to TwitterShare to FacebookShare to Pinterest
Labels: Countdown