Can They Just Make "Justice" The Official JLA Book? 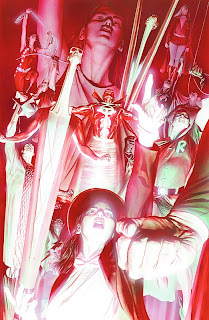 I mean, I was sitting here thinking about it...

I tried to give the current "JLA" a chance, but I really can't get into it. I don't know if it's because of the crossover with 2,000 characters in it, or the covers, or just that I don't feel any sort of emotional response to these stories.

This isn't a bash because of "Identity Crisis." I bought four damn issues of "JLA" in a row. I just don't get it. It's to the point that I couldn't read the latest issue of Justice Society either because I hated that crossover story so much.

Wasn't there a line in one of the current "JLA" books that was like "It's time for us to be HEROES again" -- maybe JLA, or maybe one of those Crisis/52 things.

You can't systematically undermine the heroism of your superhero team and then have them turn around and "decide" that they are going to be heroes again.

No, how it really works is as follows:

Iron Man stops being a hero. He acts like a dick and pisses a lot of people off.

Then the Hulk beats him unconscious. Then maybe Thor knocks out all his teeth.

After sitting in a wheelchair for a while, completely brought low and humiliated, Tony Stark begins, like Paris Hilton, to see God.

Now he decides: "It's time to be a hero again."

*That* I can believe.

As for "Justice" being the official "JLA" book, why the hell not? It's full of that patented Alex Ross "awe of superheroes" goodness, and, in the end, that has really been the selling point of DC's characters.

DC superheroes trade off of the "awe" factor -- their stock-in-trade, what they do best, is being icons of Heroism.

DC superheroes trying to be "bad" and "edgy" and all that is the equivalent of an adolescent Natalie Portman dancing around to Madonna songs in her underwear in "The Professional." It looks as awkward as hell.
Posted by Verge at 8:28 AM