So Does Katchoo & Francine Finally Hook Up Or What? 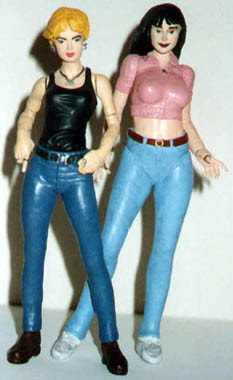 I hate to boil something as multi-layered & lyrical as Terry Moore's "Strangers In Paradise" down to that, but that's what's on my mind.

The thing about a lot of these lesbian/bi couples in comics and other media, they rarely end up together. Their romance is very often cut short, frustrated, one character dies, etc.

Now, take Batwoman & Renee Montoya. I am willing to bet you $50 that within three years one of these characters die, thus ending their relationship.

In fact, it seems as if the safest way for pop culture characters to have a longterm same-sex relationship is to not call it that. Instead of calling it same-sex, call it..."cotton candy." "Table." Anything but what it really is. Harley & Ivy in Batman Animated for instance. See, if they openly had a relationship, dollars to donuts one of them would have to die. Or at least pull an Anne Heche.

That said -- thematically, if Katchoo was to tell Francine: "look, you've been jerking my chain for like ten years now and I really want to be with somebody who really knows what they want, piss off," it would work for me.

But it would be nice to have some of these types of relationships in comics & other media work out instead of "we can never be together blah blah blah." If for no other reason than that it's a cliche.

(pics of custom SIP figures found here)
Posted by Verge at 10:06 AM

Email ThisBlogThis!Share to TwitterShare to FacebookShare to Pinterest
Labels: homosexuality in comics, strangers in paradise