As I settle down to write this I've just received a call from Doug Bratton of the comic strip "Pop Culture Shock Therapy" that I've just won his raffle. This is good. I spent a long time debating whether or not to purchase one of his books at the Con, as $ was a little tight at Casa Del Superheroine this month. But now I've got all 3. I got good swag karma. Swag. I'm up to my ankles here, typing this, swag from MoCCA all over my floor.

The MoCCA Comics Festival (Museum of Comic and Cartoon Art) was a two-day event that featured the best of the independent comic scene. It was held the same weekend as The Big Apple Comic Con. I heard that a bus would shuttle people between both shows. I would think MoCCA would have cut in a bit on Big Apple's business. To be fair, Big Apple has professional wrestlers. But I've never been to MoCCA, so I decided to give it a try.

First thing I noticed, there were no people dressed as Captain America there. It was disorienting.

Then there were all the female comic book creators. I would say that the gender breakdown at the show was 50/50.

I wondered how many of these talented women had any inclination to work for mainstream comics at some point. There isn't that much of a place for them at the moment, outside of Minx/Vertigo & Marvel's assorted indie projects. But it seems that this is where all those female comic creators -- the ones that some blog pundits (me included?) sometimes complain there is not enough of. They do exist. In numbers. They were at this show.

There were two DC tables -- Minx & Vertigo. Chatted with Vertigo editor Bob Schreck. He has new stuff a-brewin' but nothing that can be announced before San Diego. With his experience at Oni, Comico, & Dark Horse, I would expect indie books that fit the general Vertigo framework but with a twist. I've enjoyed various Vertigo titles over the years but I think that twist would really spice up the line.

Next was pumping Vertigo assistant editor Brandon Montclare for news on the Minx line. I asked him about the ratio of female talent as opposed to male talent in the Minx line. He said that actually, women make up roughly half the talent working for the line -- which is apparently going full-speed ahead in terms of pub plans. A "Plain Janes" sequel in the works? Maybe. Some serialized, multi-volume works? A possibility.

This Minx book "Confessions of a Blabbermouth," about a female blogger, sounds interesting.

I chatted with Tim Leong, editor-of-chief of the new magazine Comic Foundry (debuting in September) -- which looks awesome. Gushed to Rick Veitch over his Vertigo book "Can't Get No" -- which I rarely do to any comic creator: "it's literature, man...it's $%*^$# literature. it moved me man..." Thankfully there was no one to witness said geekery. There was also Dean Trippe (who drew that awesome Supergirl piece I've ran in an earlier post), Tim Fish (from the webcomic/anthology "Young Bottoms in Love,"), artist/burlesque dancer Bonnie Voyage, Papercutz editor-in-chief Jim Salicrup, "Fishtown" creator Kevin Colden, Eisner-nominated "Onion Head Monster" Paul Friedrich, Christine Norrie ("Breaking Up"), "Soon I Will Be Invincible" author Austin Grossman, Pop Image co-editor-in-chief Ed Matthews, and Jeff Lemire (Top Shelf's "Essex County" series).

Bumped into The Beat's Heidi MacDonald, who hadn't seen me in at least three years. She looked really awesome, and she said I looked very awesome...I'm thinking that there is some link to blogging/looking awesome.

But the highlight of MoCCA? 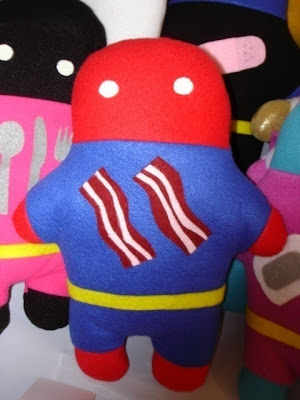