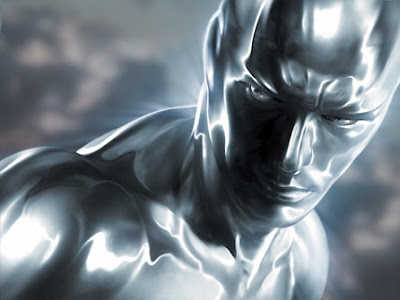 Didn't it seem like the Silver Surfer was too good for the film? Like when they hire Christopher Lee for "Gremlins 2" or John Hurt/William Hurt for most of the films they do. It's like between all the goofy Mr. Fantastic stretch scenes and Julian McMahon pouting evilly at the camera you dropped down the comic book equivalent of Jesus and he's like in a completely different film. Surfer's in a Ingmar Bergman film, everybody else is in "The Goonies 6."

You can picture some high-brow interviewer like that "Inside The Actors Studio" guy or NPR chatting with Surfer about his career in film. And when they get to "FF 2" Surfer just flashes an apologetic smile and says, "well, I did it for the money." He did it for the money. So he can have the luxury to do those smaller indie films.