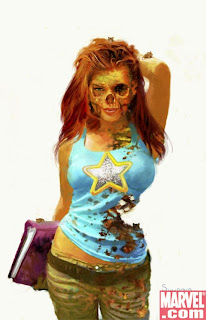 Does this cover to the 5th printing of the "Marvel Zombies" hardcover deserve the term "Blood Diamond" -- as Chris Butcher refers to it in his blog:

"Did you ever see the movie about the blood diamonds? This is what you’re really paying for when you buy any Marvel comic."

Things heated up on the Newsarama blog comments section about Butcher's commentary:

"Ah, the always reliable “I’ve got nothing worthwhile to bitch about” rant of the week."
-- Drew Clements

"So, seriously, what is going on with Marvel fans? Is it really that an extreme attachment to the status quo? Is it a fear of girl cooties from women in the comic book store if you didn’t put up signals to deter them from entering? Is it a combination of things? Did a redheaded supermodel run over someone’s puppy? Do you guys have stock in the company?"
--Lisa Fortuner

"It never fails to amuse when people complain Mary Jane is not being portrayed wholesome enough... It’s not like this is the same character who had to claim the lingerie photoshoot she did professionally were actually private photos by Peter to keep Aunt May from having a coronary seeing them. Oh wait, it is."
--Niels van Eekelen

"That cover is fun like no one's business."
--Sean McKeever

"Graeme- I do appreciate the hits, but man did you send a lot of fucktards my way this morning. I… I kind of want to start a meme to explain feminism to people, sort of like the LOLCATS thing. I’ll just get pictures of women who’ve been beat up, or killed, really violent and terrible photos, and put “MARVEL COMICS: THIS IS TEH SEXX0RZ” on them or something, see if they get it then."
--Chris Butcher

"I think the whole Marvel Zombie thing has been done with some wit and an eye towards black humor and this seems in keeping with that. I get why people are offended, however, and can understand their displeasure (I hated that ridiculous HFH cover myself to no end). But I do have a hard time finding any outrage for a cover that is clearly meant to be in bad taste, and is also quite well executed."
--Gail (Simone?)

I see where Butcher was coming from, but throwing in the "blood diamonds" analogy really hurts his argument because it is exaggerated and inappropriate to the subject matter at hand. Equating this cover to a real-world situation of forced labor, death, and extreme human suffering borders on hysteria. Calling people who disagree with you "fucktards" probably isn't so great in terms of maintaining a dialogue either.

Linking the cover to the specific teen book "Mary Jane" is kind of awkward, but I don't find the cover particularly sexualized or promoting sexual violence towards women. Okay, her boobies are a little bigger. But Hank Pym eating Black Panther's leg or The Hulk eating his own intestines seem to be more hardcore than size C+ boobies.

On another note, "Marvel Zombies" is a fucking awesome book. 'Cause I like zombies. "Brainssss!"
Posted by Verge at 9:45 AM