"So who is this famous
Frank Miller fan working for Circe?" 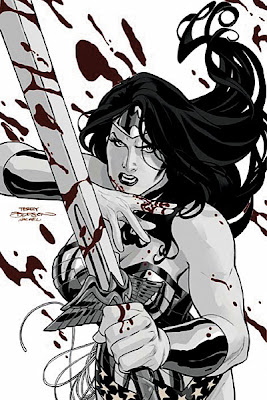 "Um, what? I know I haven’t been following the series, but does that make any sense to anyone? It’s wrong for the story, wrong for the character, and doesn’t even work on the meta-level, since it’s so confusing."
-- "Comics Worth Reading"

So Frank Miller exists in the DCU? Kinda like those classic storylines from the 70s where the comic creators existed with the superheroes and such?

But a bigger question is:

Does "Wonder Woman" currently have an editor? Or does Jodi Picoult's script go immediately to the letterer?

Between this and Miller's recent "All-Star Batman" issue with WW saying "sperm dumpster" or whatever...geez, no wonder there is no Wonder Woman movie made yet.
Posted by Verge at 9:56 AM