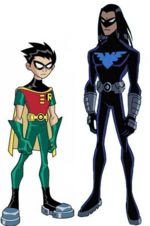 Excerpts from the fanfic, "Not Thinking," written by "Amarin Rose" & found on Fanfiction.net:

It feels a little *squicky."

I'm not opposed to "slash" (same-sex love) fan fiction, but I think there should be a little bit of plausibility. Even if Dick Grayson was gay, even if he was attracted to Tim, he would never do anything quite so squicky as what is detailed in this short fic. He would respect Tim, because he is in the position of "mentor" to the boy in a way, someone to trust.

How old is Tim supposed to be in this story? If he is underage, is this fic kind of...I don't know, sort of really really wrong? Like the Harry/Snape fics (or, Hermione/Snape, take your pick)?

Then again, is the point of the story that: since it is from solely Tim's point of view, he's just sort of *imagining" Dick really has these intentions? Like Dick is innocently doing stuff and Tim is interpreting it all from the P.O.V. of his man-crush?

"Half an hour’s thought yields a plan that makes Tim smirk, the same way that Bruce does every time he’s laid the perfect Catwoman bait. He knows exactly how he’s going to start flirting back with Dick. Next time they’re at the Clocktower, and Dick starts juggling with Babs’ beanie Bats, Tim will make the Nightwing and Robin III beanies kiss, with a pointed look at Dick. Just to see what he does."

I like Arsensal/Nightwing fic better, personally. Or anything with Angel/Spike.
Posted by Verge at 10:53 AM