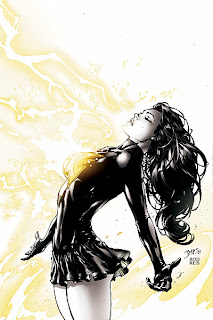 Is there anything hotter than taking a character known for her virginal innocence and filling her with darkness and evil?

I see nothing wrong with these plotlines per se. Provided that the writers don't go the route of making "Dark" Mary Marvel not just "bad" but "naughty schoolgirl" bad.

"Bad" seems to have two different meanings when referring to female characters. No such ambiguity, as far as I know, follows Luthor, Doom, or the Mole Man around.

Here's Jerry Ordway's take on the whole Mary Marvel/"Seduction of the Innocent" storyline, from Comic Book Resources (via Fanboy Wonder)

“I had issues with the time that Peter David “borrowed” Mary Marvel for a Supergirl crossover, and immediately wanted to have her sexually molested in his story. Then Keith Giffen wanted her to lose her virginity in Formerly Known as the Justice League! Now it looks like the movement to gritty Mary up are finally getting their way in Countdown.

“I know there are fans out there who are disdainful of any character who is wholesome and good, and dream of dragging that character through the mud just for spite. I go to comic stores, and have heard it all.

“As to the dark Mary Marvel– it’s just playing into a few fans’ hands. Whether it turns out well or not will play out in Countdown. I have 3 kids who like different stuff, and variety makes the world go round, but I do steer them clear of most of the mainstream comics.

“They can read what they want when they are older, but I have introduced them to appropriate material first. But having every comic book feature dark, moody and self-centered teens or adults is shortchanging the marketplace of positive, heroic, self sacrificing HEROES. With dark, you must have some light. The Marvel Family and Superman were heroes to look up to, because they did the right thing, even when that choice meant sacrifice from them.

“I’m no prude, but if you want to “violate” the intent of a character, create a new damn character, will you? Just my opinion.”
Posted by Verge at 10:17 AM