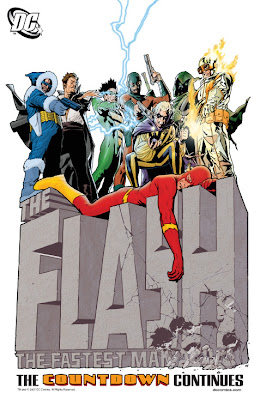 SPOILERS AHEAD (yeah, like you haven't heard of this news already)

Has there ever been a more hasty backtracking and killing-off of a character like what has happened in "The Flash" #13? What a total mess. The only moment of genuine emotion in this issue was Robin dropping the cell phone at the end when he got the news.

Bart's death seemed so rushed, so ill-planned, so totally scattered that by the time I saw his monument on the last page, I felt nothing. Because it wasn't even Bart. It wasn't the Bart from "Impulse" -- all the joy and uniqueness of that particular version of the character had been slowly drained away since the cancelation of his solo title.

The Bart Allen of this issue was a cypher, utterly generic, and his death was just as generic. It is obvious that this ending was rushed from idea to execution, presumably to clear the way for Waid's turn on the book.

I think ending the book so soon in its new run and restarting it is not as smart as perhaps changing Flashes within the run itself; it doesn't engender trust from the retailers or the fans. It's just another launch of the "Flash," another beginning, another "special collector's item issue" to hype. I hope this is not a trend.

Email ThisBlogThis!Share to TwitterShare to FacebookShare to Pinterest
Labels: the flash