Wonder Woman: Not Coming To A Theater Near You 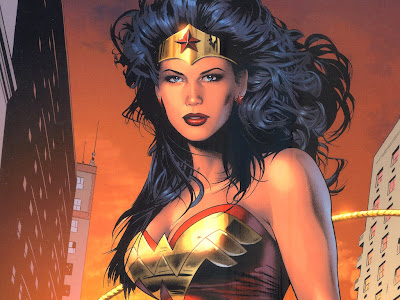 The bloggers Tom and Lorenzo, referencing a Premiere Magazine article on the non-existent "Wonder Woman" movie and other celluloid M.I.A.s, comment:

"Since Lynda Carter last wore the bustier, there have been five Superman movies, five Batman movies, three Spider-Man movies, three X-Men movies, two Fantastic Four movies and a slew of low-level, crappy, no-one-cares superhero movies like Daredevil and Ghost Rider. In all that time, they can't put together ONE film about the First Lady of Superheroes? We want our ass-kicking femme in 4-inch heels and we want her now!"

They also feel that the inability to drag WW out of development hell "smacks of sexism."

What exactly is the deal with getting this movie made? Is part of the problem the fact that she is a female character? Have big-budget bombs like "Elektra" and "Catwoman" spooked Warner Brothers?

My feeling is that the latter is the culprit, specifically the dismal performance of "Catwoman."

But I also think the problem with the movie is the same problem DC has had with the comics -- an inability to really nail down the character. The last time I really thought WW was done right was in the 80s (although Chris Moeller's "A League of One" and Darwyn Cooke's take on her in "New Frontier" were interesting, and Phil Jimenez's version had a lot of heart).

Maybe with Gail Simone on the book, the right tone for Wonder Woman will be set, and perhaps this will "leak" over into the movie plans.

As for now, we will have to have our thirst for cinematic superheroines to be filled by Jessica Alba.

(with thanks to the always-alert David Le G)
Posted by Verge at 9:25 AM