Fan Feedback On
"The Lesbian Scene"
In "Annihilation: Conquest" 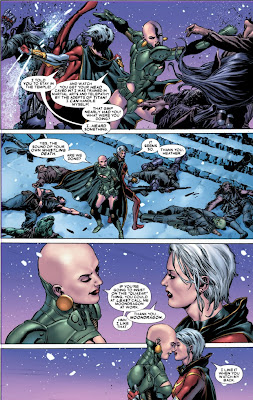 On the Newsarama forums...

"Wow, a lesbian scene with lame porno-esque dialogue. "I like it when you watch my back." Poor taste IMO."

"Does anyone think that DC and Marvel are really over doing the lesbian couple thing?
Moondragon & New Quasar (was Moondragon shown as a lesbian before this pairing?)
Thunder & Grace in Outsiders
Scandal & Knockout in Secret Six
I have nothing against lesbian couples (nor am I a tongue wagging lech over them), but it almost seems like they are using lesbian couples as a "safe" way to handle gay relationships in comics."

"How is it poor taste? The characters have been clearly established previously as lesbians, and the dialogue is only lame or porno-esque if you read that into it. Taken at face value, it reads as normal, couple conversation for superheroes. She might just as well be saying "I like it when you make scrambled eggs," or, "I like it when you take the day off with me." Except in their world, what they do is watch each others' back, because they're fighting hordes of angry, malevolent aliens."

"I agree with with your last line a lot about it being the "safe way." Like, you really don't see a lot gay male couples ( Young Avengers, and Ultimate X-men, and some others being an exception). I would like to see all varieties of couples and sexualities in comics...it adds texture and substance, makes people that much more interesting, and appealing to a bigger audience. I like how Chuck Austen handled Northstar and Icemans friendship, and Northstar and the nurse Annie (i think was her name) in Uncanny X-men a bunch of years ago, I really enjoyed those scenes., and thought they added a lot in the book."

"WHO complains about attractively drawn lesbians. ..seriously. thats like saying "i dont like oxygen, or pizza" or other such beautiful things."

"lame porno-esque dialogue" -- oh, come on. You can totally see Black Canary saying that to Green Arrow and vice-versa.

"they are using lesbian couples as a safe way to handle gay relationships in comics" -- well...yes. But you have to start somewhere.

"you really don't see a lot gay male couples"(in comics) -- this is true.

"WHO complains about attractively drawn lesbians. ..seriously. thats like saying "i dont like oxygen, or pizza" or other such beautiful things." -- oy, vey.

with thanks to David the G. who virtually puts posts like this together for me with space enough for me to give it my rant.
Posted by Verge at 5:00 PM