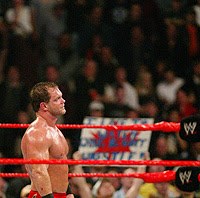 I'm going to talk about something that I have no fast-and-easy answers for. It's just something I've noticed in regards to how I have been thinking about the recent Chris Benoit murder/suicide.

I'll start by saying that I've loved pro wrestling, like comics, since I was a wee lass. I grew up watching the antics of these performers. I know who "Hillbilly Jim," "Big Bad Boss Man," "King Kong Bundy," are. I'm a fan.

But also, I tend it get up-in-arms about stories concerning the abuse of women and children. I mean, it's pretty much a knee-jerk reaction with me.

Reading more and more about the Benoit case, the old depressing pattern of domestic abuse and restraining orders emerge. Wife is scared of husband, files order, later drops it, dies at hands (literally) of said husband.

Chris Benoit's wife was found bound hand-and-foot with blood under her head. The most likely scenario, according to the cops, is that Benoit hit her on the head, tied her up, strangled her to death.

And yet, because I am so familiar with Benoit's work, because I enjoyed his matches on WCW in the 1990s, because I respected him so much as a performer, I find myself more likely to make excuses for him.

Here is my reaction to a recent news story regarding a man who killed his pregnant girlfriend: "monster!"

Here is my reaction to Chris Benoit:
"he was a poor sick man bowled over by the pressures of his profession."

And yet they are/were *both* monsters.

And they are/were *both* sick men.

And their acts? Yes, both born, to an extent, out of misogyny -- misogyny in its most primal, wordless, vicious form.

Not to mention child-murder.

But I still find myself making excuses for Chris Benoit.

I make excuses because Benoit is familiar to me, a beloved entertainer.

And I make excuses because, to an extent, to condemn Benoit is to condemn the culture of pro wresting -- a culture which, in terms of its treatment and presentation of women, I have not nor want to examine. Because to examine it -- to really examine it -- might destroy some of the love I have for this "sport."

This is just an observation.
Posted by Verge at 12:37 PM