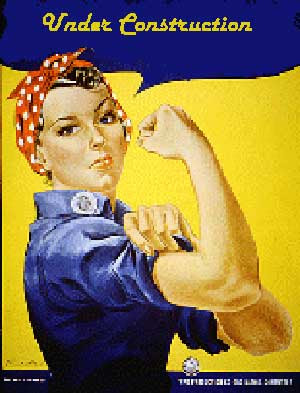 I had originally written up a few notes on Kadymae's "Changing the Comics Status Quo," but decided to sit on it for a while as I am a little hormonal at the moment and might be in danger of inserting my Converse deep past my uvula.

So I'm going to give it a day or so and maybe post it, maybe not.

Of course, since I, as a modern woman, am far from defined by my gender, hormones shouldn't be an issue. I should be *past* hormones. In fact, I shouldn't even admit I even *have* hormonal surges at certain times of the month. Better to pretend I'm *past* gender-specific issues like that, and just let people think I'm batshit for no reason.

But I sort of *like* my hormones. You know, beyond the whole *let's make babies* thing.

PMS is like this special time where all the things I usually hold back because I'm worried about *image* and *polite society* come out. As such, I'd like to brag about it, this "warrior woman of blood" phase of my month, this time when I kick ass.

But then I'd have to admit my body is different than a man's. Then men might not take me seriously. Anyway, that's what one female boss in the ad biz told me. That we should never admit we have periods, that we have PMS, that there are times when we bloat and sometimes hurt and sometimes feel a little punchy.

Oh, and that whole *pregnancy* thing too. Never really admit you're pregnant. Or rather, never admit that the pregancy thing is any sort of inconvenience. Carry that sucker with you into the workplace until the water is about to burst. Never admit that you might need rest, need time off, that you might be vulnerable just because you're creating another human being.

And then when you have the baby, try to get back to work as soon as possible. Never admit that you might need a stretch of time to bond with the child. Be stoic. Be like the pregnancy thing was incidental. You are more than your biology. Move past your biology.

Except, I cannot move past my biology so very easily as that. And if I admit it, will my former boss be right? Will it hurt me in business? Will it destroy my credibility? Are there pills I can take so I'll stop this bloody moody mess that is the hormonal dance?

I don't know if the answer is trying to "even things out" so I am equated with a man.

I think the answer is explaining my point of view to men, my unique situation as a woman. Explaining what is important to me, what offends me sometimes, what my body goes through sometimes.

Probably not as easy as all that.

But probably anything is better than saying the following:

"Yeah, there's going to be a lot of stupid, privlidged, frightened fanboys. But Rome wasn't built in a day, the Grand Canyon wasn't carved out overnight."

Anyway, I was going to post today but I think I'll sit on it. I don't want to put my foot in my mouth.
Posted by Verge at 1:55 PM