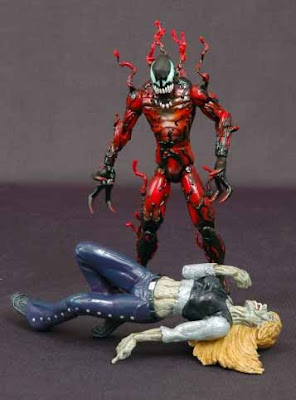 From Diamond's piece on the Spider-man "One More Day" storyline:

“HEADED FOR THE CHOPPING BLOCK?

Is it one of these ladies that take a dirt nap in the upcoming storyline ‘One More Day’? You heard it here, folks. A re-assuring voice and shoulder-to-lean-on is going to be taken out permanent-style in this four-issue storyline, which kicks off in Amazing Spider-Man #544 and Friendly Neighborhood Spider-Man #24. This body check is whipped up by war horses J. Michael Straczynski and Joe Quesada. Pain is promised. No tissues will be issued!

Who next gets thrown under the bus like the long-lost Gwen Stacy? Details are hard to come by, but what we do know is that there ain’t much joy in Mudville. Spidey’s gonna get left out in the rain again, and oh, how the tears will flow.”

"Who next gets thrown under the bus like the long-lost Gwen Stacy"?

“Is it one of these ladies that take a dirt nap"?

Who writes this stuff? Diamond?

It's not a joke. Which woman that is important to Spider-man that gets killed -- that's not a contest.

I know I sound like a nerd right now, but show these characters a modicum of respect.

Also, I've just found out that the "Gwen Corpse" action figure that I posted is indeed a real figure.