Kill Bill 3 & 4: Actually Coming To A Theater Near You 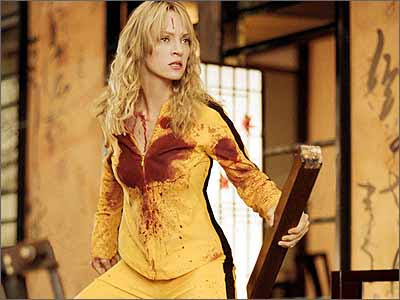 "Executive producer Bennett Walsh has revealed it is possible Quentin Tarantino will return to China to shoot "Kill Bill" parts 3 and 4."

Also mentioned in the Earth Times article are the possible plotlines for the two movies:

1) "The third film tells the story of the revenge of two killers whose arms and eyes Uma Thurman hacked off in the first stories..." -- ah, this would be Sofie & Elle. Nice.

2) "...and the fourth is said to concern a cycle of reprisals and daughters who avenge their mothers' deaths." -- Most likely scenario being that Vernita's daughter offs Beatrix Kiddo and then Beatrix's daughter BeBe goes after her.

Could the lackluster box-office perfomance of "Grindhouse" have pressured Tarantino to get these babies made sooner rather than later?

Whatever the case, "Occasional Superheroine" is excited.

Still no "Wonder Woman" movie, though.
Posted by Verge at 9:53 AM