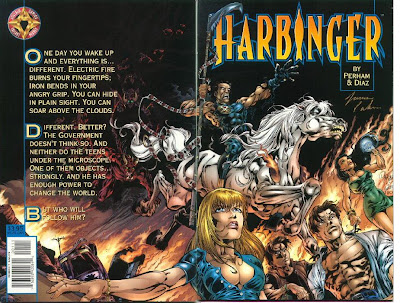 You know, being part of the comic book community is a funny thing...

James Perham was literally the last Valiant/Acclaim person to remain at Acclaim Comics, trying to hold the fort and relaunch that comic book universe one last time with Unity 2000. It was fitting that James would stick to the very end, as he was, in many was, the heart and soul of Valiant/Acclaim. He was the the glue that held things together there, not only as its operations manager, but just as a dear friend and fellow comic book fan.

I had problems sleeping early this morning, and at 4:30 I woke up and checked my Blackberry. That's when I read that James had passed away this weekend.

I mulled this over in my head, letting it sink in. It had been a long time since I saw James. My mind flipped through the pages, remembering a dozen separate instances -- funny things James had said (he was very funny), kind things he had done. A person's life can be made up by these countless instances of performing such kindnesses -- even seemingly small ones -- to others.

Given the time that has passed, I didn't think it would really have an impact -- not like it would have been with people I am in touch with now, not like a family member. But, by 5:30, when I walked in a daze into my kitchen to start the coffee, I could almost watch myself turn away from the coffeemaker, crouch to the floor, and begin to cry.

As I said, being part of the comic book community is a funny thing...
Posted by Verge at 6:13 AM