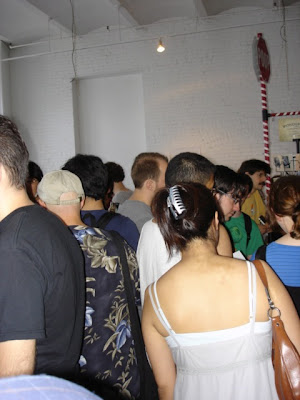 There was a strong webcomics presence at MoCCA Art Fest this year -- resulting in a bottleneck in the space where a number of the more well-known webcomics creators were situated. It was so crazy you literally could not get through.

The loyal fanbase and broad appeal of webcomics such as XKCD, Diesel Sweeties, Octopus Pie, and Girls With Slingshots -- all represented at the show -- cannot be overstated. Anybody who tells me that these digital comics do not present any sort of real competition to their print counterparts is full of crap. Seriously. 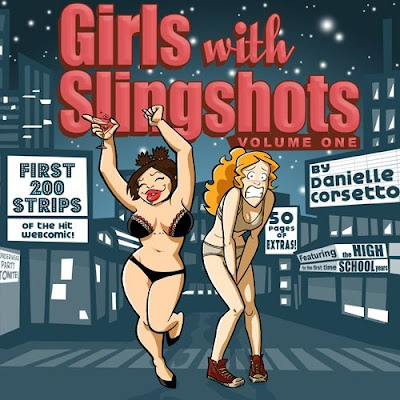 That said, I think it helps any webcomic creator to have some sort of print edition to sell/give away at show. Nay, it not only helps -- I think it is required. Take the case of Danielle Corsetto, sketching for charity at the Friends Of Lulu table and also selling a print collection of her webcomic Girls With Slingshots. Sales on the book -- that she had done on print-on-demand -- were brisk. The old argument has been: "they won't pay for comics they can get for free." I disagree.

But, the content has to be good, and your fanbase loyal. It's like those "pay-as-you-wish" downloads of that Radiohead album. No, I don't think it's a big moneymaker for them -- but they are still cleaning up on concerts and assorted merchandise. And some people will buy the "legit" collection regardless. Similarly, I think the money in webcomics are not to be made by those "micropayments" Scott McCloud refers to in Reinventing Comics, but in everything else that surrounds the daily or weekly online strip -- ads, merch, con appearances, print editions. 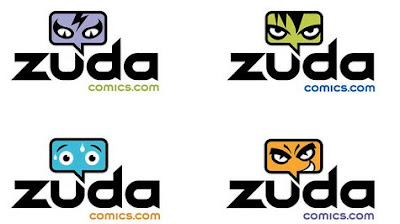 Further, if a mainstream publisher is racking its brains to find comic content with an appeal far beyond the comic book fan market, this is the way to go. One would assume that was part of the reason for Zuda's creation. Visiting their booth that was situated next to Minx & Vertigo, I wondered if they might have been better served in the webcomic section downstairs. But, then the question becomes -- is Zuda following the established webcomics model, or are they really trying to invent their own model?

Are they a "DC," or its own webcomics animal?

I would say, based on my personal observation, that the Minx/Vertigo/Zuda triumvirate is/is becoming as open, openminded, and creatively supportive as anything you could possibly find coming out of a large comics publisher. I think this is driven by the realization that the creation of truly creative content should lie with the creators. You can't just add water, heat and stir. Comics are not ramen noodles or Nestle Quik or instant oatmeal. You need innovative voices behind it, a pulse; you need to take a f**king chance. 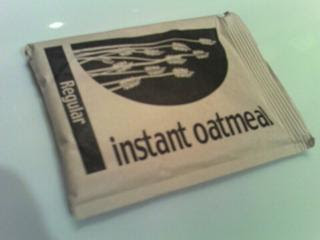 It almost feels as if presently two DCs exist -- and the question is, which one will win out five years from now? The innovation, or the obsession with the past?

(Oh, and for those who whine that I have a "conflict of interest" in even mentioning Zuda -- you know, I thought so too. That's why I held back from promoting them too much on the blog. And then I thought -- I'm getting slammed for even what little I do promote them. And that's when I realized: "You know f**k it. I'll promote them as much as I f**king want." Yes, I do have a vested interest in Zuda -- in making sure that it's legit, fair and treats its creators with dignity and respect. And it does. So if anybody would be in a position to know, it would be me. Zuda is biggest halo on DC's blessed corporate head. They treat their talent so well it blows my f**king mind. They've created a family environment between their creators and fans that has been absent in comics since around the time of Ask The Answer Man. I think this is a testament to Paul Levitz and his drive to legitimize graphic literature across genres. So unless you are in a position to really know what's going on...)
Posted by Verge at 10:28 AM