My hope and remaining shreds of optimism for the DCU:

I doubted here last week that Didio would be forced to leave. Say what you will about that department -- they take care of their own. Really, you would have to do something like walk into the executive boardroom and take a dump on the table in front of witnesses in order to be in danger of losing your job. And even then, you could just have everyone agree to never mention it again and just wipe down the damn table. And serve donuts on it the next day.

I have nothing against the rest of the company, but seriously -- outside of a few people I've mentioned before on this blog -- I want nothing to do with that particular department or their books until things actually really change for the better. Not a promised change. Not a "this book coming six months from now will really knock your socks off" type of change. But a real f**king change.

That's my right, that's my peaceful protest. Don't worry about me, that I might miss out on crucial books that enrich my comic-reading life. I've purchased enough of these suckers over the last two years to review, literally the majority of which are currently in boxes in my hallway for donation. I'll save up for next season's offerings from Fantagraphics and call it a day. They have a new book with art from old sleazy VHS boxes coming up. I'm not kidding. And I really, really want it.

And any way I can bring my memoirs to print within the bounds of legality, I will do. I will do it my way, I won't soft-pedal it. I will start looking at the multiple drafts again tonight.

I'm not as talented as George Carlin, but I agree with him that it's important that certain things are heard. Because if they aren't heard, everything slides back to the same old s**t. When Didio arrived at DC, he kicked ass. Four long-time editors were either fired or demoted there within a short period of time. That was UNHEARD OF. The office was shaken to its very core. The sight of big metal dumpsters full of the contents of people's offices was a common sight. And his view on it was -- they needed to stay optimistic. They needed to stay on the same page. They needed to stay focused. And anybody who didn't follow that was holding them back. And they had to go. Because it was a new era.

But it's 5 years later, and everything has slid back to the same old s**t. That's the circularity of corporate office culture -- how, if you don't pay attention, it can suck away all your stated goals and ideals. I don't know what it is. Perhaps it's the coffee.

It's like I've watched this government over the last eight years -- the same old s**t. Things are committed that you can't even believe -- and nobody gets blamed. Nobody gets canned. But, worst of all -- nothing changes. It just gets worse. And here we find ourselves, with a f**ked economy. And why are we here? We are here because some prick behind the same desk for the last 30 years wanted desperately to keep his comfortable way of life and his goddamn swimming pool. We're talking thousands of these pricks. In all types of jobs, all over the country. And whenever they see change -- doesn't matter if it's for the good -- they have to kill it. And whenever they hear talk of change -- they have to kill it.

I think Dirk Deppey hit the nail on the head when he referred to DC as being like the Kremlin. There are an awful lot of nice people at DC. But there are a few pricks, too. Not sure where I was going with that metaphor. I just wanted to get the word "prick" in there again, I guess. That damn post-traumatic stress thing again. Figured I say it before another pundit does.

Sorry folks, but I'm closing comments on this one post. I don't want relive this post, or my last year at DC. Unless it will make a kick-ass graphic novel and it's for reals this time.

I've been listening to George Carlin allllllll day. And it's put me in a great mood. 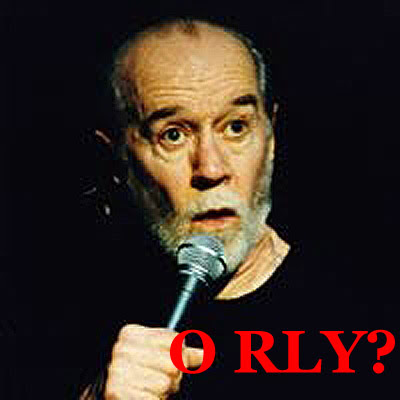