What Titans should be: 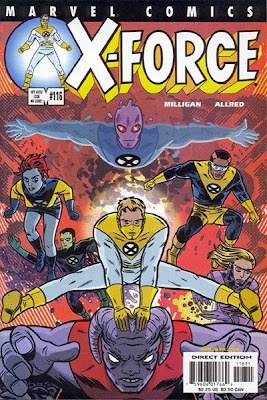 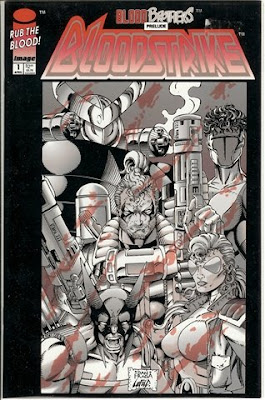 Now please don't get me wrong. Books like Bloodstrike -- what, about FIFTEEN YEARS AGO -- had a sort of trashy charm that even today I can appreciate.

But, is that what DC wants from a franchise they are trying to build up to the level of Superman and the JLA?

I read issue #2 of Titans in the store, and -- it's bad. It's really, really bad. I mean, the art style might have been interesting in a different type of project. But, I'm totally turned off by this book. One of the first pages features a splash of a female character captured or tied up with her huge heaving breasts dead center between her bonds. You know, if I want to see that done right, I'll go buy a Milo Manara collection.

Then there are other panels with Starfire where it's like: ass, Bill Ward-sized breasts, gigantic head, empty expression, impossibly arched back. Or Nightwing just standing there in the middle of a panel saying "I don't know what the hell is going on. Duh."

Isn't Titans supposed to be anywhere near a more mature level than Teen Titans? Isn't that how it works?

This book is destined to be another one of those "quick, let's retool this sucker" aborted relaunches. Trust me. Titans takes all the good that the Teen Titans cartoon did and drags the franchise back 15 years.

And if my choice of Milligan/Allred's X-Force seems too hipster to you, then at least look at Marvel's Runaways. That book is and will continue to be a consistent seller in backlist long after this latest incarnation of the adult Titans is a memory.
Posted by Verge at 9:55 AM