The End Of The Unlimited Internet? 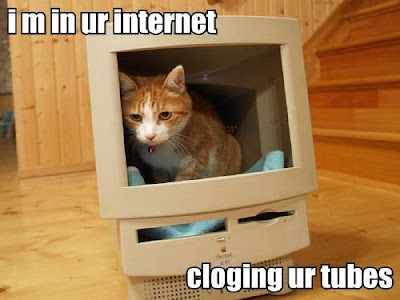 "Some people use the Internet simply to check e-mail and look up phone numbers. Others are online all day, downloading big video and music files.

For years, both kinds of Web surfers have paid the same price for access. But now three of the country’s largest Internet service providers are threatening to clamp down on their most active subscribers by placing monthly limits on their online activity."

"If my internet is metered, I don't want ads wasting my bandwith."

The impact on the relatively young video streaming industry will be huge if customers are charged by the amount of bandwith used. From the NYT article:

"Casual Internet users who merely send e-mail messages, check movie times and read the news are not likely to exceed the caps. But people who watch television shows on Hulu.com, rent movies on iTunes or play the multiplayer game Halo on Xbox may start to exceed the limits — and millions of people are already doing those things."

This will have an added benefit to old-model media, because people will be less likely to download books, TV shows, music, and movies -- legally or illegally.

Then there is the idea that metered usage will bring us back full-circle to the early days of AOL & dial-up. Is this a step backward?

Finally, people who have their wi-fi leeched from other people will be charged for bandwith they didn't use.

But, for me the larger issue is that if the internet providers succeed in getting the metering established, we will be one step closer to having to pay for "packages" of Internet content the same way we pay for cable channel packages.
Posted by Verge at 9:11 AM

Email ThisBlogThis!Share to TwitterShare to FacebookShare to Pinterest
Labels: internet