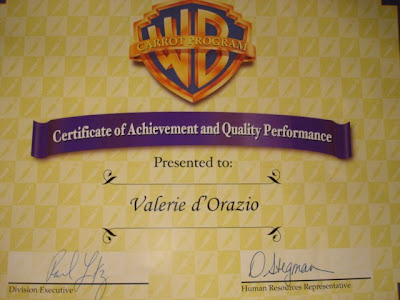 Just to have on record. Received it about 6-7 months before I left, after three-and-a-half years of service. Personally signed by Paul Levitz. When you receive this, you are invited in Paul's office and he thanks you in person for good service to the company. You also receive a cash prize. Usually everybody (in the entire company) gets called in to the 7th floor conference room and they announce the awards. I don't remember if that happened in my case or not. But, I got it.

Just to have on record. I'll be permanently including this as a link on the sidebar to my blog.

/stuff you find when cleaning your closets.

//yeah, I believe the "carrot" refers to Bugs Bunny.

///also carrot in front of the horse to pull the buggy, I guess.

////at Acclaim Comics I won a free SNES and the Turok videogame cartridge, but that was the result of a game of chance.
Posted by Verge at 6:50 PM