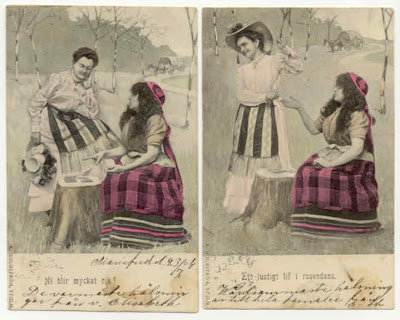 I announced a couple of weeks ago that I was going to write and draw a mini-comic for MoCCA Art Fest entitled "My Freaky-Ass Psychic Abilities" (or something to that effect), but it is clear that with my current schedule that would be impossible. So I figured I'd just write it up instead, as to not be completely inconsistent.

Several years ago, I had a boyfriend who didn't think I was "exciting" enough. Apparently, almost bleeding to death as the result of an intimate encounter with him gone awry was not enough to bump up my "extreme" cred to a point that might be Howard Stern-worthy.

So, with his blessing, I began to go out into the world -- also known as Craigslist -- and meet people who were exciting as to have life experiences and thus be exciting enough. Not unlike the hero's journey set forth in the movie "Pee Wee's Big Adventure."

These adventures included a hot date with a young woman at a fast food joint that ended with me giving her a platonic little "buddy punch" on her arm with the parting line "take care, Sport" (which she took really well the next morning when she wrote to tell me I was a jackass), a man who tried to convince me over the phone that ingesting urine was "just like drinking vitamin water," and a trip to a rave that ended when one of my companions had his wife or girlfriend dance topless on the bar, inviting other men to touch her boobies.

Undaunted, I contacted a transvestite named Cleopatra (or he contacted me), and we decided to have coffee. He was a very affable older fellow, with a lot of living under his belt. He brought me a corset he had bought recently that didn't quite fit him, and it was a nice gesture. He told me Native American folktales and the best stores in the city to buy nylon stockings. We ended the day by going to a costume shop, and while I was there I spotted a deck of tarot cards on sale.

I had thrown out the last several decks of tarot cards in my possession for various reasons over the years, many of them having to do with my several attempts to become a born-again Christian. Actually, one time I threw out the cards because a New Agey therapist I went to said they were "bad karma." Long story short, I've wasted a lot of money over the years.

So I said goodbye to Cleopatra and headed to the park, where I sat on the steps and began shuffling the cards. Not soon after I started this, the requests came in for readings.

I started doing readings, and, after the first one, I began to charge a nominal fee. Most of the people who requested readings were tourists, and the most common topics were love and work. I must have done about 12 readings that day, and there was very little down-time between readings.

In the middle of this, two Orthodox Jews came up to me with some sort of gourd and a stalk of grass and asked me if I was Jewish. I gave my standard answer, "well, my great-grandmother on my mother's side was Jewish," and they gave the standard answer: "you, ma'am, are Jewish." They asked if I would conduct with them some sort of ritual there on the steps, where I repeat a bunch of words they said. God only knows what I said, what bargains I made to God on those steps.

After the ritual, I went back to my readings. There were a bunch of teenagers in from Chicago, and I read their fortunes. The one boy got a card depicting a man lying in a pool of his own blood with a bunch of swords through his body. Obviously, he wanted to know what that one was about. I thought for a second, and then said, "you will be a detective when you grow up, and you will investigate crimes." Coincidentally, he was actually thinking of entering the FBI or something like that. Then I read the other guy's cards, and I said that he would take some time after school to find himself, "like traveling the United States in a Winnebago." One of his female friends gulped, and said he was just saying that exact phrase, with the word "Winnebago," earlier that day. I felt pretty full of myself and skillworthy, but then I wondered later if they were just shitting me.

Before they left, the first boy whose cards I read said he wanted to take a picture of me. He said it was because if these things really came to pass, he wanted to document it. I thought that was kind of neat, but then I wondered if he would take the photo to the police or something -- "the notorious gypsy card reader."

When my little card-reading expedition was nearing completion, I called my then-boyfriend up and proudly told him what I did. I figured he would think it was "exciting" enough. But instead, he said expending all that psychic energy like that would make me sick.

And it did; I came down with a flu almost as soon as I came home that ended up lasting two weeks. That was when I decided I should really charge more.
Posted by Verge at 9:58 AM

Email ThisBlogThis!Share to TwitterShare to FacebookShare to Pinterest
Labels: writing