Spoiler Warning, Don't Read The NY Daily News Either Or The URL To This Post

Warning, the following spoilers were taken from a major American newspaper who obtained said spoilers directly from the comics publisher whose book was being purposely spoiled most probably in the pursuit of mainstream media coverage.
...
...
...
...

Also, I find it interesting that the direct market is depending on the spoilers not to be spoiled in order to maximize sales, yet the company putting out the comic is purposely working with the major media to spoil the story on the morning of the book coming out. Just a thought. 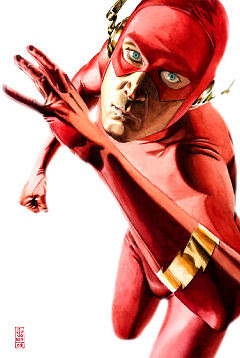 I always considered the Barry Allen Flash death as one of the cornerstones of the modern DC Universe. It represented the trauma and sacrifice of Crisis, and touched each of the major DCU heroes personally.

That said, the breaking news (broke on a mainstream newspaper, no less) that Barry Allen is returning as the Flash in DC Universe #0 doesn't surprise me.

I mean, who's left to revive? Even freakin' Bucky is back in business. Jason Todd's return proved that a character resurrection was as easy as a plot device that writers in the Silver Age would have been ashamed to use.

Grant Morrison is quoted in the article as saying,

"That's the point of comics - they don't have to die, because they're fictional creations."

I am kind of disappointed that he would say such a thing. It sounds like such a cop-out, and not worthy of him. And what is the rationale behind them not dying -- is it artistic, or is it merely economical? Wouldn't it take more artistic integrity to restrain oneself from devising some fanciful way to bring a character like Allen back?

It's just that every time you bring these characters back, you undermine the emotional resonance of those original stories surrounding the hero's tragic demise. But, I suppose if it's a choice between maintaining the integrity of some past issues that will probably do ok in backlist trade paperbacks anyhow, and the thought of getting another sales spike, the latter will probably win out.

I mean, why have the Big Two restrained themselves from resurrecting these famously dead heroes for so long? Because the sales were better back then. They felt they could afford to fold their arms over their chests and say, "This character is never returning. If we did that, we'd undermine our own integrity."

To be fair, the return of Bucky as the Winter Soldier has worked terrifically for Marvel, due in no small part to the genius of Ed Brubaker. I assume DC assumes the same will work for Morrison.

Another angle to the Allen return is why DC saw fit to break this story with a mainstream newspasper at all. One would assume that the majority of NY Daily News readers are not big Silver Age continuity freaks. What meaning does "Barry Allen Flash Returns" have on the curious onlooker who is not familiar with today's comics, much less the comics of yesteryear?

It's like making the big "hook" in Identity Crisis being the death of Sue Dibny. Dibny, Allen: who are these people? Do you think the new reader cares? The new reader sees the Flash on the magazine rack and on the TV, if they see him at all. As far as the new reader is concerned, the Flash is already alive; this current hoopla being mere hyperbole.

As insinuated in the article, since Barry Allen "saved" the comic industry the first time in the late 1950s, maybe he is set to do that all over again with Final Crisis. So perhaps this is all a "Pop Magic!" ploy on Morrison's part to symbolically juice up the ailing DCU.

You know what would really save the DCU? New readers.
Posted by Verge at 9:30 AM