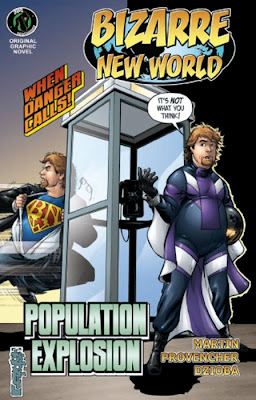 Ape Entertainment's Bizarre New World: Population Explosion is a continuation of Skipper Martin and Christopher Provencher's intriguing comic book series exploring what would happen if people had superpowers in real life. And by the last page, the verdict seems to be: "superpowers alone don't make the man."

This brought me to the bigger question of what happens when superpowers are granted to an underachiever. I have heard this argument about Peter Parker: that he was very flawed when he received his powers, these flaws resulted in his uncle's death, and it was only after confronting tragedy that he really changed into something resembling a hero. But the powers themselves did not make him a hero, didn't magically transform his mind into something noble.

I think the most interesting superheroes are those who are so flawed -- whose own foibles and neuroses, selfishness or conflicts, are bigger adversaries to them than the super-villains they have to face.

What do you think? Who is your favorite flawed superhero?
Posted by Verge at 3:15 PM

Email ThisBlogThis!Share to TwitterShare to FacebookShare to Pinterest
Labels: spiderman