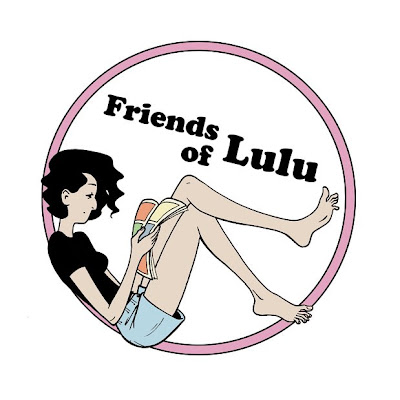 This Lulu designed & drawn by Paul Salvi -- thanks, Paul!!!
It's that time of year again -- time to nominate the best and brightest for the 2008 Lulu Awards!

The Friends of Lulu annual Lulu Awards bring honor and recognition to the most inspiring and noteworthy women in the comic book industry, as well as the efforts, achievements, and works that reflect Friends of Lulu's goals. Nominations for the Awards are open to anyone. Once the nominees are chosen, only current members of Friends of Lulu will be able to vote for who should win each award. The Lulu Awards will be handed out this year during the MoCCA Art Festival in New York City, Saturday June 7.

The Women Cartoonists Hall of Fame nominees must have published work, whether self-published, company-published, or Web-published. An individual cannot win more than once.

Women of Distinction nominees must have worked in the comic industry in a non-creator role, such as editing, publishing, reporting, or retail.

The Lulu of the Year Award honors the creator(s), book or other project whose work best exemplifies Friends of Lulu's mission.

The Kim Yale Award nominees must have published work, whether self-published, company-published, or Web-published. Nominees must be nominated for this category within three years of their first published work. An individual may not be nominated more than twice, and cannot win more than once. The award is named for comics writer Kim Yale, a founding Lulu member who passed away in 1997.

Email ThisBlogThis!Share to TwitterShare to FacebookShare to Pinterest
Labels: Friends of Lulu, women in comics