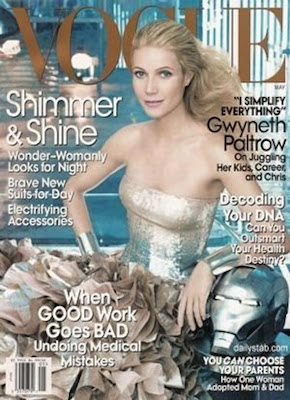 I took a double-take when I saw the cover of May's Vogue Magazine -- it had an Iron Man helmet on the cover!

Of course, it also had Gwyneth Paltrow hawking her new movie. But I thought the fact that mainstream comics made the cover of Vogue was pretty neat. 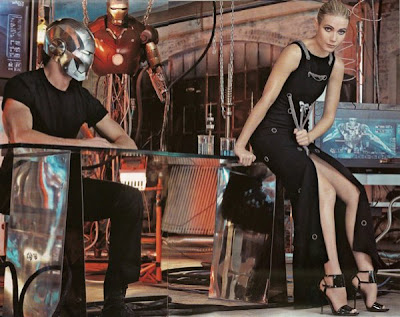 But that's not all -- there's also several superhero-inspired photo spreads, including:

Armani is quoted in the booklet:

"The power of fashion, like the power of the superhero, lies in its ability to bring excitement and hope to everyday life."

The article that accompanies the Costume Institute article analyzes various superhero costumes in terms of their symbolism and influence on high fashion. For example:

""The Postmodern Body," personified by the Punisher (1974) and Ghost Rider (1972), is a contemporary take on the idea of graphic signifiers, an eclectic mix of gang fashion and style."

Postscript: With magazine sales at new lows and a hurt economy making women more wary about purchasing high-end fashion items, might publications like Vogue be trying to court a more general audience with pop-culture stories on summer blockbusters and the like?

I would be interested in seeing the sales numbers on this issue.