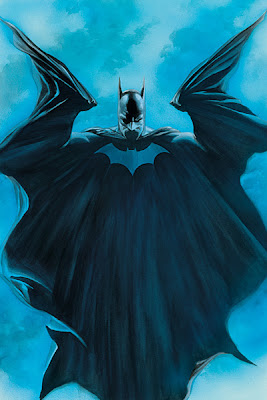 I am about 75% sure I know what the deal is with Batman/Bat-folks in Final Crisis. Being in a crowded convention center for three days straight with 60,000 industry people and fans, it was inevitable that some tasty tidbits were going to shake out.

I am so sure that I'm not even going to hint as to whether my various and sundry other theories were correct or not. This is because I firmly feel that, in the end, spoiling comics to that extent is a shitty thing to do.

I will say, however, that the amount of information/disinformation that has gone out about "Batman RIP" is the most covert, multi-layered, and labyrinthine operation that has ever been undertaken since the Kennedy assassination. I mean, it has truly been impressive. I suppose, in an era of "Marvel B0y" and Internet spoilers running through the system in the matter of a day, it must have been necessary.

I'm simply going to shut up, grab some popcorn, and wait for the books to come out. This is really going to be good.
Posted by Verge at 3:07 PM