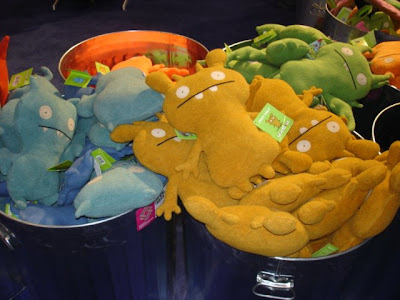 Convention guests were greeted by a giant Ugly Doll display upon first entering
If the big theme of San Diego Comic Con last year was regarding its "Hollywoodification," this year it must have been its heavy Japanese/youth culture influence.

The Biggest Star At The Con
The biggest thing that struck me about this convention was the heavy manga/Japanese culture presence, and how successful it was. I remember seeing this gigantic line bisect the convention floor, and wondering who everybody was waiting for. Neil Gaiman? Jim Lee? Ron Perlman?

No, they were waiting for Japanese pop singer T.M. Revolution. A good portion of those in line were Japanese, but certainly not all. 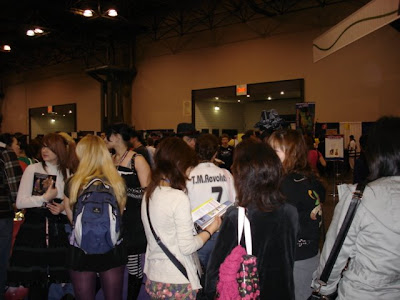 The line for Japanese pop sensation T.M. Revolution
But think about it -- how many of those people were mainstream comic book fans? Maybe I'm jumping the gun here, but I would assume not a tremendous amount. They came to New York Comic Con to see T. M. Revolution, whose elaborate Sgt. Pepper/David Bowie-type outfits were on display in a booth at the show. They also came to see the Gothic Lolita fashion show, and purchase manga and related items from the exhibitors dedicated to just those products.

Designer Toys
Another phenomenon that struck the convention? Designer vinyl toys and stuffed animals. These are limited-edition artist toys, often very "cartoony" in design, that can run an upwards of 100+ dollars; a number of these toys are Japanese in origin or influence. I saw more exhibitors showing off their brightly-colored designer toys than I did standard action figures. And honestly, had I the money, I'd have bought tons of them. I absolutely love that s**t. But back when I was collecting this stuff hard-core, about 5 years ago, I could rarely find them at cons. That has completely changed. 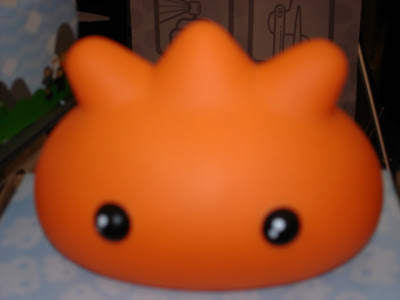 Even the Christie's auction house booth had a glass case filled with ultra-expensive vinyls.

NYCC: Now With More Females!
This is all not to say that superheroes -- standard capes and cowls -- were outshone at New York Comic Con this year. Of course the Marvel & DC booths were mobbed. But I assume the big turnout for T.M. Revolution, Gothic Lolita, the Japanese toy importers, the American independent designer toy makers, and the humongous booths for manga producers like TokyoPop will not go unnoticed by the convention organizers.

Also not to go unnoticed -- the heavy influx of of young women at this convention. Far far more heavier than last year. Certainly a portion are interested in mainstream Marvel & DC. But probably not the legion dressed in Gothic Lolita dresses, manga cosplay outfits, or screaming Milo Ventimiglia's name at the Devil's Due booth.

(But to be fair, OS reader Red Stapler -- big mainstream comic fan -- did snap a picture of herself with Milo. sigh, lucky...)
Posted by Verge at 8:10 AM