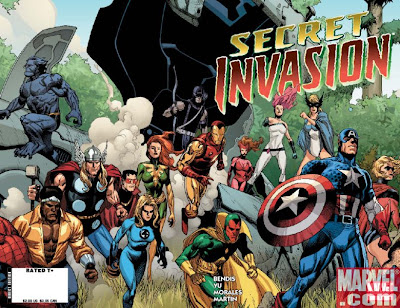 Okay, here's a question that popped into my head after discussing Secret Invasion #1 with the bf this morning:

To recap, at the end of Secret Invasion #1 (SPOILERS to the three people who may not know) a whole bunch of what we would term "Seventies" superheroes come out of a ship and confront their modern-day counterparts. These are versions of Marvel superheroes from the 1970s (for the most part).

We could also, for the sake of this discussion, call them "Bronze Age" superheroes (which actually covers the heroes up to the mid-1980s).

Now, to us -- or rather, to the comic fan who knows all this stuff -- what we see come out of the ship are Bronze Age heroes from the 70s and early 80s. 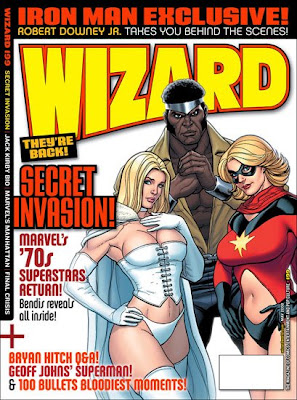 But in the Marvel Universe, in terms of (wait for it...) continuity, these characters are not from that time period. Marvel time moves slower, no? Peter Parker was not a teenager over 40 years ago -- we're talking more like several years ago, ten years tops (please correct me at any point on this, I'm not an expert).

So we see some of these "returnees" wear 1970s-style hair and outfits, but they were not actually from the time period, they were from a handful of years ago.

However -- am I making a lot of assumptions, here?

Could these characters actually be from another "universe" or time period?

And if we get into that -- are we talking about multiple earths or timestreams?

I realize this is pretty far-fetched, but I'm just asking... 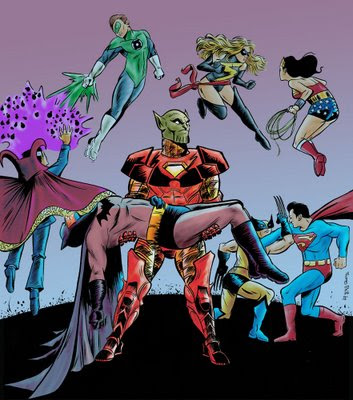 Image by Thomas Pitilli for Comic Foundry
The one thing I like about the DC Universe was that they recognized various "eras" in comic book history as having existed, by using the "multiple earths" gimmick. Whereas with Marvel, you have more of a delayed-time thing.

I mean, what if you really had an Earth -- Earth M.M.M.S., for instance -- where the continuity from 1960s Marvel really existed? (and there might be ones like this from Spider-Girl, etc).

What if you had multiple versions of Spider-Man confronting each other?

Speaking of "ultimate" -- what if at some point you say the Ultimate Universe is a genuine separate universe, and you had the characters from there confront their Marvel U. counterparts?

I'm not saying Secret Invasion is going to go down this path AT ALL.

But I will say that it's always been a fangeek dream of mine to see a "Crisis on Infinite Earths" treatment of the Marvel U.

(okay, there is the whole other debate as to whether catering to fangeek dreams like mine reels in the new readers. let me put this on hold while I geekdream)
Posted by Verge at 12:19 PM