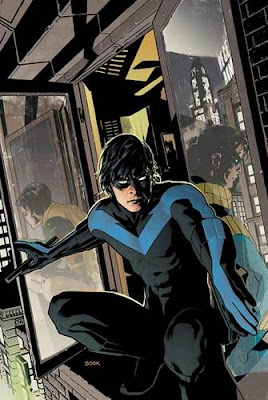 And the basic resolution of this rumor has always been: well, it was considered by certain higher-ups to axe him, but in the end they can't do it because it's friggin' Dick Grayson fer Godsake.

On yesterday's "Who's Gonna Take The Dirt Nap In Final Crisis" thread, one commenter suggested that Nightwing might die in the event.

Now, that's crazy, spurious, and most probably thrown in just to stir up the pot.

But -- (tin foil hat firmly in place) -- I can point to several reasons, mostly to be found in DC's Solicitations for July, why that might not be such a crazy idea at all.

The Case For Nightwing RIP:

1) Everybody thinks Batman is going to die, so a switcheroo like that would come out of left field and catch people off-guard.

2) The persistent (though apparently squashed time and time again) "Nightwing will die rumors."

3) Pete Tomasi, writer of Nightwing, is also writing "Final Crisis: Requiem" -- the issue where this "DC Universe staple" is set to die. Who better to keep such a big secret like Nightwing's demise? And a former DC editor yet?

4) The solicitation copy for that month's Nightwing boasts an unexpected and tragic ending.

5) The solicitation copy for that month's Titans boasts that one Titan will make the ultimate sacrifice.

6) The solicitation copy for Batman/Robin indicates that Tim is taking over (at least temporarily) for Batman. Why not Nightwing? With Batman fallen, wouldn't Dick Grayson be first in line to take the reins? And why not more talk of Grayson's reaction to Batman's fall? Wouldn't he be the first in line to avenge him?

7) It would be DC's chance to finally stop those "Dick" jokes.

So that is my case for Nightwing unexpectedly getting killed off in Final Crisis. Indeed, it would be a death that would have great emotional resonance. But it would be a really ballsy thing to do, and at least be as controversial as that Mary Jane thing.

Can you really kill off a character as well-known as Dick Grayson?

Getting a kick out of this speculation: 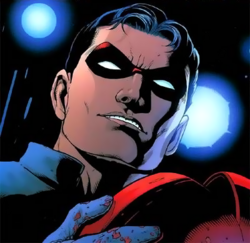