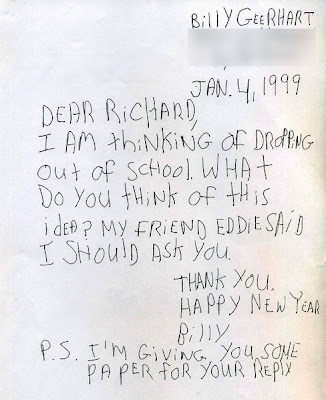 This story I found on Radar was so kooky I just had to post it:

"In the late '90s, pop-culture historian Bill Geerhart had a little too much time on his hands and a surfeit of stamps. So, for his own entertainment, the then-unemployed thirtysomething launched a letter-writing campaign to some of the most powerful and infamous figures in the country, posing as a curious 10-year-old named Billy."

It turns out that the convicted murderers and serial killers "Little Billy" wrote to were happy to reply.

"Billy,
Greetings. Got your letter. What school do you go to? Who's your friend? You should stay in school. Send pictures.
Richard"

Best of all, apparently Ramirez had his own personalized stationary with his "serial killer name," Nightstalker, printed on the top. With an upside-down pentagram in the dot of the I. That's class. That's awesome that they let serial killers maintain their own "branding."

In the next letter to Billy, Ramirez asks the boy to send some pictures of women in bikinis, and see if he knows any Asian women who might like to correspond with him.

Little Billy also wrote to Charles Manson (of course), and many more.

Kind of makes you wonder what would have happened if there really WAS a Little Billy, huh?
Posted by Verge at 11:00 AM

Email ThisBlogThis!Share to TwitterShare to FacebookShare to Pinterest
Labels: bizarre