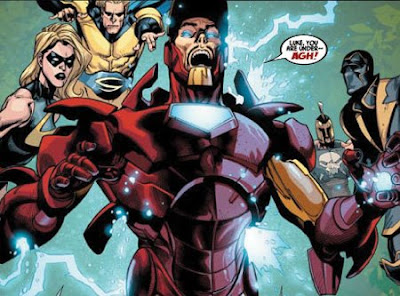 This is just a minor point, and it doesn't detract from the book, but...


You know the scene where Iron Man has a seizure and they ask for something to put in his mouth?

When someone has a seizure, you are not supposed to put anything in their mouth, because they could choke on it.

From the Wikihow on treating someone with an epileptic seizure:

" Do not touch the person's mouth or put anything in it, including water or medicine used to treat seizures, as it may cause the person to choke. People having seizures cannot swallow their tongues, despite popular belief."

I was brought up to think that you had to give the person a pencil to bite down on or something, so they wouldn't swallow their tongue. But you are not supposed to put anything in the mouth of someone having a seizure -- no pencils, fingers, meds, anything.

Anyway, feel better, Tony Stark. Sucks about the Skrull thing.
Posted by Verge at 11:14 AM