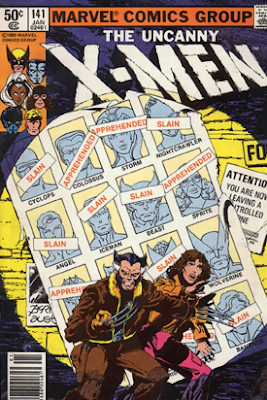 Flipping through Wizard Magazine #200 today (my commentary on which I will provide tomorrow), I came across their "Most Controversial Persons" sidebars. One was for John Byrne.

And that brought to mind what a comics professional told me recently.

This person said (and I'm paraphrasing):

"You know, everyone can make fun of John Byrne and say stories about him and his message board. But the man has made an extensive contribution to this industry over a long period of time. He deserves respect. Respect."

I agree. Say what you want about the man, he has really contributed a lot -- a lot of it really good.

A lot of people I know have "Byrne stories." I only have one personally. I had lunch with him and my co-workers in an editorial meeting thing about five years ago. Really brief -- about an hour. At the time, I was really physically ill, but I just sort of put a happy face on it and soldiered on.

John was goaded to "let loose" on some Claremont stories, etc., but he sort of demurred on it and "held back." He didn't seem bitter or caustic -- he was pretty good-natured and friendly. He told us some good stories about the biz and his work in general. It was just all-around pleasant.

And I was glad and appreciative, because had it been some sort of gossipy, angry type of conversation -- had that negativity entered -- I don't think I could have held on with how sick I felt that day. Instead, I limped out of the lunch feeling cool because I just had lunch with a legend in the industry and he seemed nice and it was awesome.

See? That's not a memorable story. But it's a true one.

Here are the questions: Is there a level of respect that has to be given to the man, considering his body of work as a whole? Can we separate out the anecdotes from the work? Are we appreciating John Byrne enough now while he is still around and continuing to contribute to the industry? Or are the critics justified?
Posted by Verge at 2:33 PM