Buffy the Vampire Slayer #13: Willow Don't Talk Like That 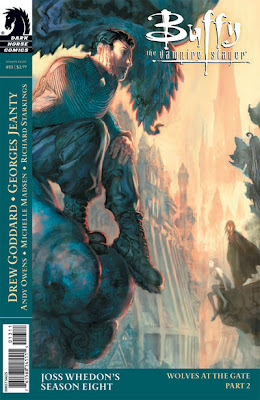 In a scene in Buffy The Vampire Slayer #13, Willow asks Satsu (the young woman who Buffy slept with last issue):

Willow is like Buffy's sister. Willow is Buffy's second-in-command. Willow would not refer to Buffy that way, in "locker room talk."

Has Xander ever asked this question of Angel or Spike? Has he ever asked, as Willow does, "Did she make that high-pitched squeal?"

I think it's just a question of the level of respect that Buffy & Willow have for each other.

Further, it's made explicit that when it's business for the Slayers, it's business. In the scene in question, they are flying to a battle in an airplane, army-style. Buffy is the commander. Willow is second-in-command. Satsu is a soldier. I would think it'd be bad form (not to mention distracting) to ask sexual questions about the commander on the way to a fight.

The "voice" of Willow in this scene just doesn't ring true. Now, that could be because she is really a Skrull. In which case -- brilliant!

Then there is the whole question of how Dracula has apparently become Stewie from Family Guy. I have no problem with Drac being (I'm assuming from the issue) bisexual. I have no problem with there being some sort of implied relationship (sexual or otherwise) with Xander. But, it's just played in a very broad, cartoonish way. It's almost played in that way where the very fact of Dracula being "gay" is the punchline.

It would have been far more interesting to see Xander in an actual, conflicted relationship with Dracula. To give equal time and show a male in a serious sexual relationship with another man in this TV/comic book series. But, it's like to water the idea down, the whole situation is played mostly for laughs.

I know there is a certain level of irreverence to Buffy The Vampire Slayer. But, I think in the TV show there was a better balance between the humor and the dramatic moments. Too much of this issue seemed like one big joke. I've read some Buffy "slash" fan-fiction that has played it a lot more true.
Posted by Verge at 6:12 AM

Email ThisBlogThis!Share to TwitterShare to FacebookShare to Pinterest
Labels: Buffy the Vampire Slayer, homosexuality in comics