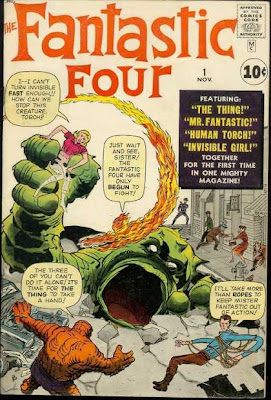 I think I've referred to this topic in previous posts, but I stumbled upon this article on prepping your comics for CGC and I decided to bring it up again. Basically, CGC is a company that grades and "slabs" your books for collection purposes.

I don't remember there being a CGC type slabbing service when I worked in a comic book store in the early 1990s. In those days, to put the comic in a mylar sleeve was considered a big deal. I think after the mylar sleeve came the sturdier sleeve or "case" -- the predecessor to the "slab" we all know and love today.

I still look for copies of comics that are in "mint condition" when I am at the comic book store. This is an unconscious search, habit, an automatic reaction built from my earlier comic book collecting experience. I never pick up the first copy of an issue on the rack -- I always reach in the stack and try to get a "fresh" one. Yes, just like one might do with a bag of Wonder Bread. The irony is, once I take it home I bend the cover back, toss it by my bed side, the cat steps on it, I step on it, etc. 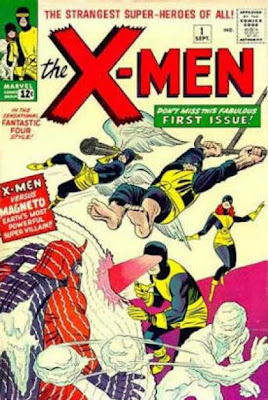 My first assignment at the comic book store I used to work at was to accompany a co-worker to an-off-site grading session. It was basically the fabled story you heard so many times you believe it's just an urban legend: early runs of Marvels in decent condition kept in some guy's suitcase and found by accident. First Spider-Man, a run of Fantastic Four from issue #1, etc. Crisp, bright covers, non-yellowed pages, probably read only once and socked away in the suitcase.

And so started my strange, complicated, long-term relationship with Mr. Sid Lonesome. The first day I had to meet up with Sid to do the grading with him, he was late. Then I saw him coming down the block and the bus was coming. I hopped on the bus and motioned to him to pick up the pace and catch the bus. He didn't catch the bus. I got off the next stop and waited for him. I watched him make several unsuccessful attempts to light a cigarette in the face of a direct blast of wind. Then we went to the house to grade the comics.

We were both impressed at the collection, to say the least. Sid was instructed by his boss not to gush over the comics but keep a poker face; he gushed anyway. This of course made the bargaining harder. The owner of the books was an antique dealer, so he was no dummy. He just didn't know comics, didn't deal comics.

The way the deal went down, we paid through the nose for some of the "keys" in the collection -- Fantastic Four #1 etc. -- and then bought some of the lesser books, like early Tales of Suspense and Daredevil, for cheap. 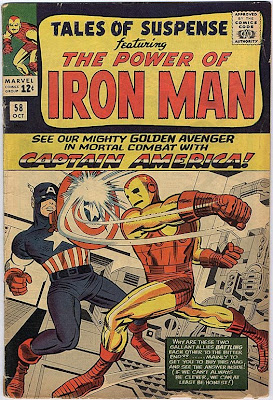 Me and Sid finished the day by going to a big Chinese restaurant, the suitcase of comics resting on the floor beneath the table. We already devised how we would mark some of the really lesser books at fives and dollars and then just buy them ourselves. Our boss was paying us largely in comics anyway, either right-off-the-bat or when we turned around and spent our pay on them.

I determined that day that I really liked Sid, but I wasn't sure how. Many, many, years later, I was still at that stage of our relationship; I really liked him, but I wasn't sure how. And then we went our separate ways, touching base only occasionally. But I'll always remember -- he was a terrific comic grader. A terrible buyer, but a terrific grader.
Posted by Verge at 9:34 AM