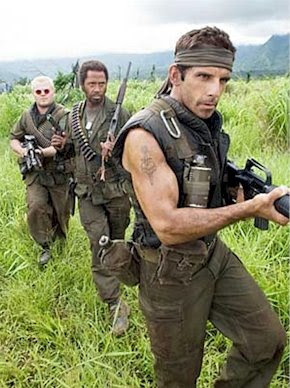 People from the Special Olympics and the American Association of People with Disabilities have protested the opening of the new Ben Stiller comedy "Tropic Thunder," and many more are calling for a boycott of the film.

At issue? The liberal use of the word "retard" in the film -- specifically in regards to a movie-within-a-movie where Ben Stiller's character plays a mentally-disabled man.

Is this another case of PC-attitudes going amok? Or can a legitimate point be made that the word "retard" is as offensive as other words that are now mostly taboo?

Personally, I make it a point not to use the word "retard." It's just one of those words that seems kind of hurtful and ugly, even if used in the 1980s teen movie bully-picking-on-somebody sort of way that doesn't specifically refer to someone with learning disabilities.

That said, I can see that in the movie "Tropic Thunder" the point is that it's almost a cliche how actors and actresses pick parts as mentally disabled characters to establish their "cred" as serious thespians. Sometimes this turns out great, other times you get "I Am Sam" which I had to literally watch from a distance and halfway from another room because it was so corny.

But I don't like to use the word "retard," and maybe the protesters are right in so much as they suggest we give the term a second look and question its acceptance.

(I plan to watch "Tropic Thunder" eventually but really would rather see "Step Brothers.")
Posted by Verge at 12:31 PM

Email ThisBlogThis!Share to TwitterShare to FacebookShare to Pinterest
Labels: movies