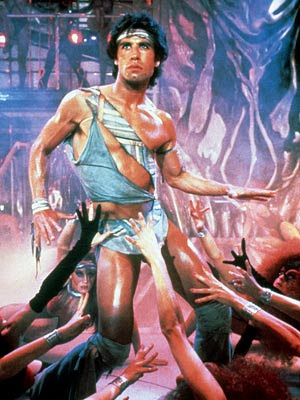 So many things about this film:

1. It's literally a "what if Sylvester Stallone made a dance movie?" Answer: many women (and men) half-naked in spandex.

2. The opening scene, at the dance try-outs, is an Eighties camp classic.

3. The Broadway show at the center of the film -- "Satan's Alley" -- is unbearably bad, yet it is always referred to as awesome and the show of Tony's career.

4. Tony Manero is portrayed as a complete and total asshole.

5. Director and writer Sylvester Stallone had no real grip either on the movie's predecessor, Saturday Night Fever, nor on the workings of the actual dance community -- resulting in a movie that rings hollow on both.

6. This film started the fast slide into failure & obscurity for John Travolta, a blow he would not recover from until Pulp Fiction. 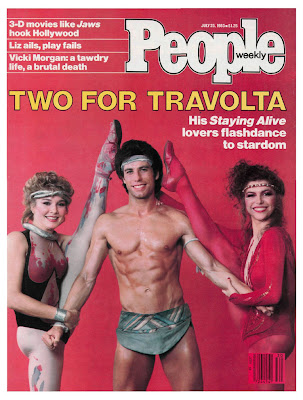 7. The very end of the film, where a triumphant Tony struts down Broadway in tribute to the opening of "Saturday Night Fever," should cause us to root for him -- but all I can think about when I see it is, "this guy has just been a selfish, insufferable asshole through the entire picture."

And yet, I never fail to watch this movie whenever it comes on cable. It's so preposterous that I am transfixed & compelled. It is the 1980s version of Showgirls.

And of course, we would later see Staying Alive co-star Finola Hughes later in TV's Generation X as Emma Frost: 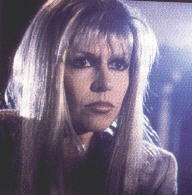